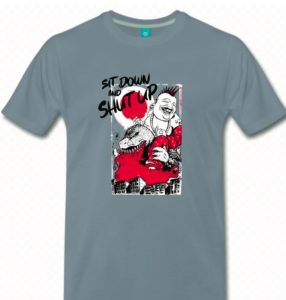 Today is my last full day in Northern Ireland. I’m gonna go out and enjoy the day soon.

Yesterday I received the T-shirts that Annette Mann put together for this year’s tour and they sure are spiffy! We only made 100 of these because we have no idea if anyone will buy them or not. If I have any left over at the end of the tour, I’ll sell them from this blog. But to those of you who do show up for any of the events listed below, if you want one of these I’d advise you to get one while you can. I don’t plan to make any more of them. Your purchase of a T-shirt will help me get through this tour.

They’re publishing a Spanish edition of Gudo Nishijima’s translation of Fundamental Wisdom of the Middle Way. They asked me for an itroduction. So I wrote one. Here it is: 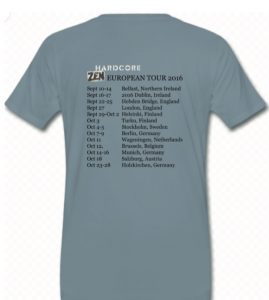 Even so, I think it’s a good book because it expresses my teacher’s understanding of Mulamadhyamakakarika very well. Does it express what Nagarjuna would have wanted it to say to English and Spanish speaking people 1,800 years after he wrote it? I don’t think anyone can answer that question. But I will say this. If you could express exactly what Nagarjuna wrote perfectly in English or Spanish, I still don’t think that it would be quite what Nagarjuna would have wanted to say to us 1,800 years in his future. That is if he wanted to say anything to us at all. Here’s why.

What would you want to say to the people of the year 3816 CE, possibly people living on another planet, who most likely speak a language that does not even exist today, and whose life is so different from yours that you cannot possibly even imagine it?

Maybe you know what you would say. Personally, I have no idea what I would say. I write books now for people alive today. If people still read those books in the year 3816 CE on another planet in a language that doesn’t even exist now, I don’t know if it’s possible that they could understand them no matter how precisely and accurately they were translated. In Nagarjuna’s day the English language did not yet exist, nor did Spanish. The people living in India at that time did not know North, Central, and South America even existed.

This is what humans of the future will look like according to a book I owned when I was about ten years old.

If my books are still around in the year 3816 CE, and if people are still interested in them, I hope that someone who understands the fundamental attitude of Buddhism will translate them into a contemporary idiom. I don’t care if that person changes what I have said to suit the audience of the year 3816 CE. In fact, I think they should change what I wrote. I think a lot of changes would be absolutely necessary. Otherwise my words would just be the dead words of a long vanished person from a long vanished civilization. They would have very little meaning.

This is what I think Gudo Nishijima did with Nagarjuna’s words. This is not a standard translation. But Nishijima has a firm grasp of the Buddhist outlook. He produced his translation based on that understanding and based on an understanding of the minds of the people of the 21st Century. There is no way Nagarjuna could have known what people of our time would be like. So this book may not express what Nagarjuna wanted to express to readers in India 1,800 years ago. It probably doesn’t. But perhaps it expresses what people of the 21st century need to hear better than Nagarjuna could have.

Gudo Nishijima died not long after the English language version of this book was published. I sent him a copy of the finished book but I do not know if he read it. He was already very ill by then. He read some of the early drafts before he died, though. And he was happy with how I fixed up his words.

I can’t read Spanish. But I have had some communication with the translator and I think he is very competent and careful. So I believe this Spanish translation says what Gudo Nishijima wanted it to say. As for Nagarjuna, I can’t even guess.

If someone wants to translate this book again in 1,800 years, I hope they make all the changes they think are necessary.

That’s what I said in my intro for the people of Spain. Having said all that, I do believe there is a place for what I’d call “museum quality translations” of ancient books like Nagarjuna’s or Dogen’s Shobogenzo. I read them. I know scholars enjoy them. There is tremendous value to trying to preserve a facsimile of the original for future generations. I do not hate those kinds of translations. I like them. They are good. They are useful. They are necessary for in-depth study.

I hope you read that paragraph. Sometimes I feel like certain people miss these things when I say them. So I’ll say it again. I do not hate museum quality translations of ancient Buddhist books! I love them! I have a shelf full of them! This is not a put-down of those kinds of translations!

But I was never certain if he was trying to do that with Nagarjuna or not. When I asked him about it sometimes what he said sounded like he wanted to make a museum quality translation and sometimes what he said seemed to indicate he did not care at all about such matters. I suspect he he had a completely different outlook on the matter that was neither of these options. In any case I think that’s fine either way because museum quality translations of the book are already available for anyone who wants one.

Be that as it may, as a means of conveying the intention of the original writers to ordinary people who are not prepared to do in depth scholarly study, those museum quality translations are problematic — and I include the Nishijima/Cross translation of Shobogenzo in the category of “problematic for ordinary readers.” They’re confusing. They take a lot of stamina and brain power just to get through. You need to have a strong gasp of history even to attempt reading them. And worst of all, they’re usually boring to most readers.

They’re not boring to me, mind you. But to the average person who just wants to know what this whole Buddhism deal is about, they’re horribly tedious.

I don’t think Nagarjuna or Dogen were horribly tedious to their original readership. Granted, they were difficult (although Dogen also wrote some stuff that was intended to be easy). But they weren’t a slog just to get through. They were relevant and even exciting.

Look at the Lotus Sutra, for example. Sure, it’s a snoozefest to you and me. But it must have been like reading a Harry Potter or Twilight novel for folks a thousand years ago. It’s got people flying through the air and shooting rays out of their foreheads and all kinds of crazy stuff just to try to engage the audience before it gets to the deeply philosophical stuff.

We can’t dig up Nagarjuna or Dogen or the unknown author(s) of the Lotus Sutra and ask them what they really meant. But we can find the meaning in these old texts for ourselves and try to convey that to our friends and neighbors in a way they can understand. We might fail, but I still think there’s some value in trying.

The people of the year 3816 CE don’t help pay my rent, but you can by making a donation to this blog!