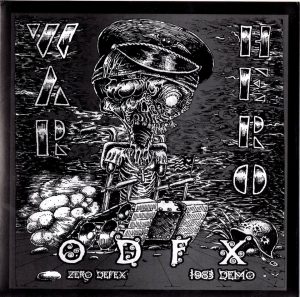 Two weekends ago I led a retreat in Belfast, Northern Ireland and this past weekend I led one about two hours’ drive up the road from Dublin in a retreat center called Jampa Ling. Tomorrow night I’ve been invited to attend the opening celebrations to kick off International World Peace Day in Dublin.

Back in the days of the first incarnation of Zero Defex, the hardcore punk band in which I play bass, some of the folks at a local ‘zine called Oops! made fun of Zero Defex by publishing a picture of a group of nice looking hippie type people, labeling it as a photo of Zero Defex, and putting a little word balloon coming out of one of their mouths that said, “War is bad!”

We were one of those punk bands. We were political. We were annoyingly left-wing. We probably still are both of those things.

Somehow these days, certain segments of the Interwebs have decided I’m a war-mongering, rape-apologizing neo-fascist. Which is what happens when you deviate from the approved script, I suppose. Given my specific history, I always find that a little funny.

Peace is a big concern in these troubled times, what with New York getting pipe bombed and everything else. Everyone’s worried about Islamic terrorism which, they say, is on the rise. Lots of Americans warned me not to even go to Europe this year, it’s so terrifying.

It’s more complicated than just that, of course. It always is. Just like it is with our current crop of terrorists. Read this if you want to know the gruesome details about how much terrorism there was in Europe in the recent past as compared to today.

Belfast, where I just was last week, was at the heart of this conflict. Dublin also saw coordinated bombings  of the kind today’s extremists often favor. So, while this sort of thing is unfamiliar to my fellow Americans, it’s nothing new over here.

So why do we keep on doing it? The reasons we give are always complicated. It took me three visits to Belfast before I got any sense of what The Troubles, as they call them, might have been about. I still don’t think I’ll ever fully comprehend all of it.

But often I wonder if maybe it’s a lot simpler than we want to admit. I wonder if all the reasons we come up with to justify violence and war aren’t just window-dressing.

Maybe none of us really knows why we want to blow each other up and make mothers lose their sons, wives lose their husbands, dismember children, fuck up nice buildings that took ages to build and all the rest of it. Maybe when we state our reasons for doing these things we’re really just making it all up. Maybe we don’t know because we can’t know. Maybe it’s unknowable.

Maybe hate doesn’t care who it hurts just as long as it hurts somebody. Maybe our justifications for hate are only ways of holding on to hate by not acknowledging it, by pretending that terrible thing we just did had good reasons — when we know damned well it didn’t.

Maybe it’s too hard to admit we just wanted to hurt somebody. Not us! We’re the nice ones! Maybe we must deny what we know is true in order to preserve our view of ourselves as “good people.” Maybe our justifications for violence are just ways of holding on to our sense of self.

But what if self is an illusion? What if the thing we’ve been trying so hard to justify doesn’t exist? What if it doesn’t need to be preserved or justified because it’s not even real? What would happen if we started looking at it that way?

What if we could acknowledge that we all hate?

World Peace may be a long time coming, but my rent is not! If you make a donation to this blog it really helps!