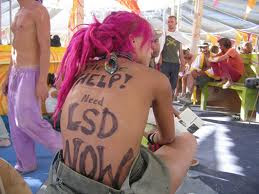 I recently got into a fairly ridiculous debate on Facebook with some people who think that psychedelic drugs can get you to the same place as meditation. I don’t really know why I bothered. Except that people who advocate this position are so passionate about it and it’s really easy to pull their chains. It makes them crazy when someone with meditation experience disagrees. It’s like when you bother a fire ant mound.

During the discussion, one of the supporters of drug abuse as a way to gain spiritual insight started in with the time worn cliché that drugs are like taking a helicopter to the top of a mountain rather than climbing it. You get the same breathtaking view as someone who has climbed the mountain. But you get there much quicker and more easily. “You can’t deny it’s exactly the same view,” one guy said. But, in fact, I would unequivocally deny that it’s the same view. It’s not. Not at all.

Metaphors always fall apart if you press them too much. But I like this one because it shows exactly what the problem is when you start saying drugs will do for you the same thing as meditation but faster and without all the muss and fuss.

Let’s say you met a veteran mountaineer with over a quarter century of climbing experience, a person who has written books on mountain climbing and routinely personally instructs others in the art of climbing. And let’s imagine what would happen if you tried to convince this guy that people who take helicopters to the tops of mountains get everything that mountain climbers get and get it a whole lot easier.

The mountain climber would certainly tell you that the breathtaking view a guy who takes a helicopter to the top of a mountain gets is not in any way, shape or form the same view that a person who climbs the mountain herself gets.

The helicopter guy misses out on the amazing sights there are to see on the way up. He doesn’t know the thrill of mastering the mountain through his own efforts. He doesn’t know the hardships and dangers involved in making the climb. And he’ll never know the awesome wonder of descending the mountain back into familiar territory. All he’s done is given some money to a person who owns a helicopter. He probably couldn’t even find the mountain himself, let alone make it to the top. When there are no helicopters around, the poor guy is helplessly grounded.

People who think that the pinnacle of the experience is that moment of being right on the tippy-top, don’t understand the experience at all. The poor attention addled things probably never will.

What I am working on in meditation involves every single moment of life. So-called “peak experiences” can be fun. But they no more define what life is about that so-called “mundane experiences.” When you start making such separations, you have already lost the most precious thing in life, the ability to fully immerse yourself in every experience.

No. Taking a helicopter to the top of a mountain is not at all the same thing as climbing it for yourself. To insist that it is proves that you don’t understand the first thing about mountains.

My attitude about drug use and its relationship to spiritual experience has been characterized as intolerant and fundamentalist. One clever-trousers on Twitter said, “Brad Warner’s shadows are bigger than Genpo Roshi’s. The guy is so blind he probably shouldn’t even have a driver’s license.” Whatever that’s supposed to mean. But my attitude has no more to do with fundamentalism or conservativism than our fictional mountain climber’s attitude about rich, hasty pleasure junkies who take joy rides in helicopters. It is unambiguously clear that drugs and meditation cannot take you to the same place simply by the very nature of the experiences. They are not even in the same league of things. The comparison between the two is entirely spurious and unworthy of examination.

People who say these things about drugs and meditation may have tried drugs but most have never really attempted much meditation. Oh maybe they’ve gone to a handful of yoga classes and done shavasana. Or maybe they’ve been to a Vipassana retreat or even rented a cabin at Tassajara one summer. But they don’t have any real depth of experience with meditation to compare to their drug experiences.

I’ve run the mountain metaphor into the ground. So I’ll stop here. I’ll leave it to the people in the comments section to come up with unnecessary and wrong-headed further variations on the metaphor (like talking about the views you can get from helicopters that mountain climbers can’t see or some such dumb ass thing — metaphors can only be stretched so far before they become absurd).

But here is a brilliant song (probably) about drugs by Gene Clark: