Browse: Home / Press Page for Brad Warner’s “There Is No God and He Is Always with You” 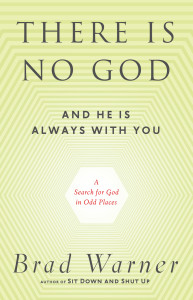 “An important book.”
James Ishmael Ford, author of The Book of Mu and If You’re Lucky, Your Heart Will Break

For more information or to book an interview with Brad Warner about There is No God and He is Always with You, please contact Senior Publicist Kim Corbin at New World Library.

Writers like Sam Harris and Richard Dawkins have made a compelling case for the new atheist movement, and Karen Armstrong produced a well-reasoned comeback in her recent book. Now, in There Is No God and He Is Always with You: A Search for God in Odd Places (New World Library, June 24, 2013), Zen monk and bestselling author Brad Warner makes a profoundly engaging contribution to the God-or-no-God debate in his trademark “intimate, funny, conversational style” (Library Journal).

As a believer myself, I’ll admit that the title of this book initially ruffled my feathers a bit, but as I read Warner’s perspective with an open mind, I quickly discovered that we are far more on the same theological page than I initially thought. He does an excellent job of challenging the notion that God is something that can be easily understood or neatly filed away into a clearly defined mental box.

“What you think of as God does not exist. It couldn’t possibly exist. No matter what you think of as God, it’s an image you’ve created in your mind,” he writes. “And yet there is something powerful and ineffable that is the ultimate ground of all being and nonbeing. And some people use the word God to talk about that ineffable something. Sometimes I do too.”

Warner was initially interested in Zen because he wanted to find God, but Zen Buddhism is usually thought of as godless. In these pages he travels, looking for insight, to places including Israel, Mexico, and Northern Ireland and finds, in chapters like “Sam Harris Believes in God,” “God Doesn’t Have to Be Real to Exist,” and “God Holds His Own Hand” that Buddhism offers a unique lens through which to examine the concept of God.

“The word God means different things to different people . . . A lot of people expect that as a Zen Buddhist monk and teacher, I must not believe in God. They’ve read that Buddhism is a Godless religion. And some folks are frightened by this idea. But many, especially the people I meet in my capacity as a Buddhist teacher, are elated by it. They love the idea that they can have a religion without a God,” writes Warner in the book’s introduction. “But in my opinion it’s entirely wrong to say that Buddhism is a religion without a God. It’s quite the opposite. To me Buddhism is a way to approach and understand God without dealing with religion.”