Browse: Home / Can You Be My Teacher?

Can You Be My Teacher?

I feel like it might be time once again to address one the most frequent questions that comes to me:

Can you be my teacher?

I have addressed this before. I’m not even sure how many times. Maybe I should make it an annual thing. Or, given how often I’m asked, maybe I should just make one definitive post and put it up every three months.

The short answer is this:

If you live in Northeast Ohio, or if you want to brave the snow and ice and come here, I will be starting a regular zazen class on Sunday evenings at 7pm at the Akron Shambhala Meditation Center at 133 Portage Trail in Cuyahoga Falls. This will begin on January 15th. If you show up, we can sit together and maybe talk a little bit. I’m also working on setting up a religious nonprofit in Los Angeles. The group I started there still meets every Saturday morning at 10 AM at 237 Hill Street in Santa Monica. You can find out about them by going to dogensanghalosangeles.org. Chances are good I will be attending the regular sittings there starting in the Spring. If I can get it together, that is. Meanwhile they still go on without me each and every week without fail.

But most of the people who ask me about my becoming their teacher live in places far from me. So I really have no idea what they imagine would happen if I said “yes.” Perhaps they imagine I have a center somewhere that they can run off to and escape their dreary humdrum lives into a world of beautiful Zen.

I understand that dream very well because I had that dream myself for a long time. I used to imagine that there were places out there somewhere — if I could only find them — where I could run away from all my troubles and just immerse myself in the wondrous dharma. But there are no such places anywhere.

Tassajara Zen Mountain Monastery is about the closest thing I’ve ever seen to what I used to dream about. It’s beautiful, it’s isolated, it’s dedicated to Zen practice, it’s not a brainwashing cult. Tassajara is nice. But it’s also not a place you can run away to in order to escape your real life. Real life will hunt you down and find you even there. Some people try to escape their real lives by going way, way far away like to India or Japan. But real life always catches them. It caught me even in the mountainous wilds of Toyama Prefecture, Japan.

What I wanted when I dreamed of those places was really just to return to childhood. I wanted to have a new mommy and daddy who would look after me and deal with all the serious shit while I got to play. But, see, even my actual childhood wasn’t like that. My actual childhood was pretty miserable in a lot of ways. I was bullied and hassled and bored. So even saying that I dreamed of returning to childhood isn’t right. I dreamed of going to a dreamland that never existed because it couldn’t possibly exist.

I imagine some people out there who ask me about me becoming their teacher are offering themselves as submissives. They want to submit to me so I can be their master and they my slave. If you want that you can go to Genpo Roshi or Andrew Cohen. They take on submissives, I hear. Me, I wouldn’t get into a van with either of those guys. I don’t want any submissives. Not as Zen students anyhow.

Maybe the folks who ask about me becoming their teacher imagine we can create some kind of on-line teaching relationship. There are Zen teachers these days who take students on-line. To me that sounds like pure nonsense. But rather than speak in generalities about the concept of Zen teaching on-line, I’ll just tell you why I, Brad, do not do it.

I don’t do on-line Zen teaching because I really don’t like the on-line experience that much. I’m not that into sitting in front of computers typing things. And yet I’ve fallen into a line of work in which I am constantly sitting in front of a damned computer. It’s rare that I spend any less than four to six hours a day in front of this god forsaken machine. That’s pretty much the minimum requirement in terms of keeping up with my own books and other writing projects. Then I also have to answer emails from people I know personally, answer emails from people I don’t know from Adam who write to me, keep up the correspondence necessary to get speaking gigs and things and find cute animal videos on YouTube.

If I were to try to develop any on-line teaching relationships that would add at least another six hours a day of staring at a computer screen on top of what I do already. Plus I really have a bad memory in general. I have a hard time even recognizing people I know when I see them. People I know well are fine, but I’m constantly embarrassed when people I know just a little bit come up and start talking to me and I can’t recall who they are to save my life.

When it comes to people I know only as names on the top of email messages I am totally hopeless. I’d have to work out some kind of weird organization system just to keep up with who was who and what they said to me last time and what I replied. Just getting that together would be a couple hours a day. And would I get paid for any of that? Nope. So when am I going to be able to do the things I need to do to earn a living?

It’s just not gonna happen. I’m sorry. I know you’ve got serious issues and I know you like my books. I appreciate that you read what I write. I’d like to help. But I just can’t.

Then there’s all the issues I have in general with the whole notion of teachers and students. It isn’t always an abusive relationship of the type that Genpo Roshi and Andrew Cohen advocate in the link I provided above. But it’s so easy for it to devolve into that sort of thing. And this isn’t just because evil manipulative teachers evilly manipulate their innocent students into becoming mindless slave zombies while they sit back and go “Mwah-ha-ha-ha-HAAAAA!”

In fact, there is a whole great class of people out there who desperately want to be turned into mindless slave zombies. Anyone who takes on the role of a spiritual teacher has to invest tremendous time, effort and energy in dealing with these kinds of people. Some of them will insist upon becoming mindless slave zombies no matter how hard you try to tell them not to. Here is a perfect example of how that works:

I can’t tell you how many times I’ve felt just like Brian in this scene from Life of Brian. There are people out there who are exactly like the mob that follows him. And no matter how often you tell them not to follow you, they so desperately want to be led that they’ll follow you anyway. It can be really stressful. I actually admire the honest people out there who take on the role of the teacher because I know what they have to deal with. All the people who want to be turned into mindless slave zombies think they’re being very sincere and devoted. Which just makes it that much worse.

Watch that clip from Life of Brian again and pay close attention to the character played by John Cleese. He’s the guy up front who says, “I should know (you’re the messiah)! I’ve followed a few!” He takes on the guise of a follower. But he’s really not. He wants to lead the movement. But he hasn’t got the right sort of personality or charisma or whatever magic it takes to actually have people consider him to be the messiah. So he latches on to someone who has a following and offers to help that person maximize his potential.

This is very tempting because guys who do the sorts of things that get them followings are usually not really good at management type stuff. Plus it’s a lot of work to have students. This means it’s nearly impossible to take on students and have a normal paying job. So guys in Brian’s position who want to try to be teachers need to find someone to help them get butts in seats and keep the donations rolling in and so on. So people like the character John Cleese portrays here can be very attractive.

But those guys will destroy everything. And they’re everywhere. Almost all of them think they mean well. Some are very convincing. Oy! The stories I could tell you…

Anyway, this desire people have to be led is a really tremendous and very basic problem for humanity in general. This desire ends up causing all sorts of terrible tragedies like Naziism, Terrorism and the phenomenon of lousy boy bands and hair metal acts.

So that’s why I can’t be your teacher.

It’s not that I don’t like you or that I don’t think your problems are serious. It’s just that I can’t do it. I’m flattered that you asked. But you’re asking for something impossible, so I have to refuse. 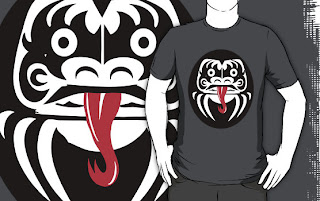 Here’s an interview I just did. Maybe you’ll like it.

Oh! And my friend David Sango Angstead designed a new T-shirt/Hoodie/Bumper sticker etc. for me that you can get on my Red Bubble page. It’s a very cool design. I need to order one for myself!