Browse: Home / What I Really Do

What I Really Do 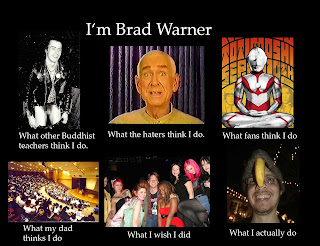 You must have seen a dozen of these “What I Really Do” things by now. Some of them are kind of funny. Most are kind of dull. I thought I’d do one for myself before somebody else did. Click on it and you should get the full sized version. If you’ve never seen one of these & want to know what they are, just enter “What I Really Do Meme” into your favorite search engine.

So I just found out this blog gets over 10,000 views a week and over 7,000 visits. I’m not sure what differentiates a visit from a view. But that’s a lot of people. Where are my Gempo Roshi-like piles of cash?

I’m kind of all Zenned out at the moment. I’ve been answering loads of questions as Tricycle magazine’s Meditation Doctor. If you want to read some of that stuff go to this link. It’s interesting that it all kind of boils down to just one question and just one answer. Some ancient Zen teachers noticed this and responded the same way to everyone who asked. Like Gutei, who would just raise one finger whenever someone asked him anything. I get that. But somehow I don’t think Tricycle’s readers would be satisfied if I just kept flipping them the bird.

Uh oh! The latest question is from someone who says they’ve been “experiencing deep, absorptive states.” Not sure what I’m gonna do about that. I guess we’ll see once I start writing my answer. I think Bounty is the quicker-picker-upper for deep absorptive states!

I kid! I kid! Hey! Don’t forget to tip your bar tenders. I’ll be here all week. Be sure to try the vegetarian imitation veal.