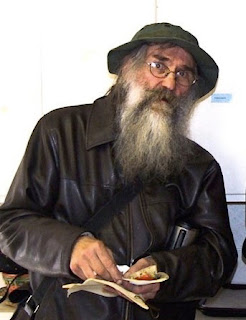 I heard last night that Fuck You Bob was dead and it made me sad.

The Record Pub website put up this obituary about Bob. The Kent Patch put up an article about his memorial service. And Nick Rock put together this video tribute to him.

Bob’s friends are making an effort to put the proper spin on his life as an artist and his contributions to the town as a philosopher and intellectual. I appreciate that. I think it’s a good thing. But the tribute-makers seem to want to avoid the one thing that most people remember best about Bob. And that is the fact that Bob Wood walked around Kent, Ohio for decades telling people to fuck off.

I first encountered Bob when I was a freshman at Kent State University. I was sitting in one of the big lecture halls one night to see a movie. It was some sort of indie artsy film. Maybe Eraserhead or something along those lines. I don’t remember the movie at all, though. What I remember is Fuck You Bob.

I was there with Mick Hurray, the drummer of Zero Defex. Bob was directly in front of us. And he kept giving us the finger. He never turned around. He never said anything. He just flipped us the bird over and over. And he was doing it in a really weird way. He kept turning his hands at different angles (he was giving it to us with both hands) so as to make certain we got his message.

We thought this was hilarious. So we gave him the finger back. I’m not sure if he saw this, though. Like I said, he never turned around. We weren’t angry or offended at all. It was much too weird for that.

Throughout my time as a student at Kent State I saw Fuck You Bob around town. He had a load of bizarre behaviors. For example, I once saw him walking down the middle of a busy street. Every time a car would come by, he’d jump up on the sidewalk and wait for it to pass. Then he’d get back into the road and continue walking.

Several years after this I moved back to Kent after living in Chicago for a while. I was walking down Franklin Avenue from downtown toward the Kent Zendo, where I lived. I saw Fuck You Bob coming my way. I wondered what he was going to do. He didn’t say anything as he passed me, didn’t even give me the finger. And I found myself being a little offended at this. He said “fuck you” to everyone else in town. He’d even said “fuck you” to me on more than one occasion. Was he snubbing me now? What did I do to him?

But a couple seconds after he passed I heard him say, “Suck my dick.” And you know what? I felt good. I’m not even joking. I still remember how nice I felt to have been told by Fuck You Bob to suck his dick. If he hadn’t said anything to me that day I’d probably still feel I’d been slighted.

I never encountered Fuck You Bob again after that day. But I remember being in Japan and hearing from friends back home that Bob had gotten better. He was getting his art exhibited around town. He was studying for his Master’s degree. And shockingly, he wasn’t saying “fuck you” quite as often anymore. Though I was relieved to hear that he still did it sometimes.

Bob had a lot of what most people think of as “mental diseases.” A lot of people said he had Tourette’s Syndrome. But I never heard of anyone having officially made that diagnosis. Still, he was an odd character.

I always wondered if his habit of telling people to fuck off ever got him in real trouble. Kent State University is not one of those schools that attract the best and the brightest this nation has to offer. Heck, I even went there! One of these days I’ll tell you about my first roommate. God that guy was as dumb as a box of putty. If Fuck You Bob was flipping the bird to guys like that, especially when they were drunk, which they always were, he was surely getting the crud beat out of him on a regular basis. I hope he was at least targeting wimps like me who weren’t likely to get very mad at him.

The concept of mental disease is an interesting one. We know enough about the proper functioning of the kidneys or the bladder or the spleen to be able to diagnose when they’re working incorrectly. But when it comes to the brain, things get a bit murkier.

Take someone like Bob. In many ways it would be easy to dismiss him as crazy. But from what I can tell and from what I’ve heard he lived pretty much the life he wanted to live. He was by all accounts a very intelligent and even kind person. He probably had no desire at all to fit in with regular society. And he didn’t. I admire him for finding a way to live his life on his own terms.

He was also, from what I’ve heard, kind of a pain in the ass to people who knew him. I don’t know the details. But I can guess. I mean, for gosh sakes he was saying “fuck you” to everybody in town all the time. That alone is hard to deal with.

One of the things Zen has helped me with is my own tendency to be a sort of Fuck You Bob type character. My difficulties in dealing with society are not as deep seated as his were. But I too have some serious problems reconciling what I know to be true with the bullshit most people seem to believe. I could have easily gone in a direction that would have ended me up in much the same shape as Bob. The Zen thing helped me be able to laugh at the collective illusions society shares and yet still play the game well enough to get by.

This is why I get so annoyed when some people try to turn Zen into what most religions these days have become, a way to placate people so they’re numb enough to function as cogs in the social machine. It’s not about that.

To me it’s about finding your inner Fuck You Bob and making peace with that. But without killing it off or boxing it up either. That’s also important.

I’ll miss Fuck You Bob. I wish I could’ve met him just once and sat down and told him how much it meant to me when he told me to suck his dick. I really wonder what he’d have said. Maybe he’d have told me to fuck off.