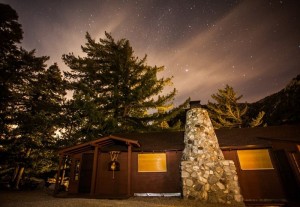 This photo was taken at one of our retreats at Mt Baldy Zen Center.

One of the earliest Buddhist practices was what we now call in English a “retreat” or, if you’re from the San Francisco Zen Center or one of its offshoots, a “practice period.” In Japanese it’s called ango, which means “peaceful residing.” This is where you set aside a certain period of your life to devote yourself solely to meditation.

In ancient India, the rainy season lasted for around 90 days. In a society that was still largely agrarian, there wasn’t much productive work you could do during the rainy season. So it was a perfect time to seclude yourself in a hut and meditate all day for the duration.

The Japanese rainy season (tsuyu) isn’t as long as India’s. It generally lasts about 30 days, usually in June. Still, the Zen Buddhists of Dogen’s time stuck with the Indian tradition of 90-day retreats, starting in June and lasting through the Summer.

In our time, a 90-day retreat is a very difficult commitment. They still exist, but I’ve never been able to do one. And if someone as devoted to Zen practice as me can’t get it together to do a full 90 days, it’s unlikely people less committed are going to be able to manage it.

In order to do a 90-day meditation intensive or — God forbid! — devote years to monastic training, you’ve got to be either really convinced or truly crazy. Or else you could just be so desperate that you feel you need a very extreme solution to whatever is bugging you. I mean, how are you gonna pay the bills and prepare yourself for life in this world if you’re just hanging out on a mountain somewhere staring at the walls all day with a bunch of other damaged/crazy people?

Fortunately, there are now some easier options.

Retreats are a vital part of Zen practice. While daily sitting is the core of Zen practice, it’s important to also do longer practice times whenever possible. There is a depth of practice that only happens when you engage with yourself over a long period of time. For those of us who can’t spare 90 days, one-day, three-day, five-day or seven-day retreats are all great ways to do this.

The idea of sitting and staring at a wall for a day or several days can seem like a depressing prospect if you’ve never done it before. Sometimes I overstate the boredom associated with Zen practice to try and counter some of the extravagantly romantic descriptions you get elsewhere.

But it’s actually not boring or depressing at all. You get to see yourself as you really are and you can often solve some of your deepest, most troubling problems just by looking at them carefully. Solutions just sort of pop out at you. It’s kind of amazing.

We also do a chanting service each morning and evening, work periods, and yoga led by my friend, yoga instructor Nina Snow. There will also be lectures and Q&A sessions, as well as the opportunity for dokusan (personal meetings) with me. And you’ll be able to take advantage of the beautiful location for hiking during free periods.

If you sign up for a “Zen and Yoga” or “Zen and Calligraphy” or “Zen and Lacrosse” or “Zen and whatever” retreat at some places I’ve spent time at, what you’ll get will be a lot of yoga or calligraphy or lacrosse and a small amount of (almost always optional) Zen. Meditation centers generally know that meditation is a tough sell and often minimize or very nearly eliminate actual sitting from the schedule. The idea of such retreats is to get you in the door with the hope that maybe 10% of those who sign up might come back some day.

On the other hand, some Zen places go to the opposite extreme. They expect even first-timers to sit for as much as ten hours a day and will, quite literally, hit you with a big wooden stick if you so much as scratch or sniffle.

What we offer is a genuine Zen retreat with the yoga added to soften the impact of so much sitting. We offer three and a half hours of seated meditation on the longest of the three days along with about two hours of yoga (split into two sessions)  and lecture/discussion periods. Meals are eaten in silence as a way of continuing the meditation during the meals. There is also a Zen style work period of 40 minutes, which is yet another opportunity to practice meditation with movement.

During the sitting periods, I also offer personal consultations with all participants (dokusan). Just think of it, folks! You’ll be able to sit with me in a room and talk!

This is the perfect amount of sitting for both beginners and long-time practitioners. It’s not too much for beginners to deal with and it’s not so little that people who’ve practiced for a while feel cheated. And if they do, we offer free time in the schedule when you can go to the zendo and sit some more if you want. I used to do that when I attended Gudo Nishijima’s retreats, which had a similar schedule. You can also skip yoga and lectures to sit if you feel so inclined.

That last bit, the part of your practice in which you feel like you can’t possibly go on any longer, is the best. It’s like exercising. You have to push a little. You’re bothered by your overactive mind because you give in too quickly to whatever it demands of you. This is true for me and for everybody else too. When you learn in practice not to give in so easily, you train the mind to be still when it doesn’t get exactly what it imagine it wants. By not scratching every single itch that comes up and not shifting around each time you feel like it, you learn something incredibly valuable. You learn how to be fine with the things that come up even when you don’t really like them. And you also learn how to enjoy the things you like that much more because you can stay with what’s actually going on.

We’re also very liberal at our retreats. If you have to miss part of it, nobody’s going to bug you about it. If you’d rather go hike up the mountain while the rest of us are sitting, we’re not gonna tell you not to. We may wonder why you signed up for a Zen retreat instead of just driving up Mt. Baldy and hiking on your own, but that’s about it.

So if you’re interested in taking your practice a step or two beyond what it already is, please click on the link below and sign up. Our discounted early-bird special rate is still available for a few more days. But hurry up!

One of the main ways I make money when I’m not leading retreats is through your donations to this blog. I won’t get any of the recent Angel City Zen Center fundraiser money. I appreciate your on-going support!