Browse: Home / John Wayne Was Not a Nazi

John Wayne Was Not a Nazi 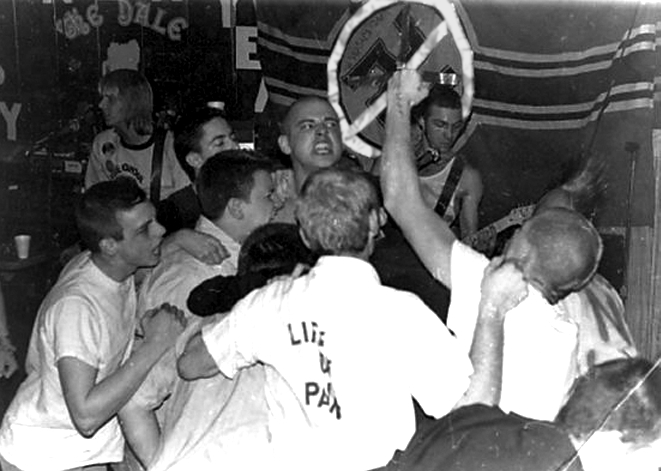 0DFx performs in front of desecrated WW2 era Nazi flag in 1983. Before we messed it up, that flag was probably worth more than all the money the band ever made. I’m on left under “The Dale” sign.

Lots of people are wrongly called “Nazis” these days. That’s my fault.

One of the first things Buddha told his fans was that they should follow the Noble Eightfold Path; Right View, Resolve, Speech, Conduct, Livelihood, Effort, Mindfulness and Samadhi (often translated as Right Meditation).

Last Saturday, Emily Eslami gave one of her usual brilliant talks at the Angel City Zen Center. Because of the current political divisiveness in the US, she decided to talk about this idea of Right Speech as it applies to contemporary American politics. It’s available on our website. She brought some good stuff from the earliest records of Buddhism to share.

Here’s the Buddha’s own criteria for Right Speech:

[1] Words that the Buddha knows to be unfactual, untrue, unbeneficial, unendearing & disagreeable to others, he does not say.

[2] Words that the Buddha knows to be factual, true, unbeneficial, unendearing & disagreeable to others, he does not say.

[3] Words that the Buddha knows to be factual, true, beneficial, but unendearing & disagreeable to others, he has a sense of the proper time for saying them.

[4] Words that the Buddha knows to be unfactual, untrue, unbeneficial, but endearing & agreeable to others, he does not say.

[5] Words that the Buddha knows to be factual, true, unbeneficial, but endearing & agreeable to others, he does not say.

[6] Words that the Buddha knows to be factual, true, beneficial, and endearing & agreeable to others, he has a sense of the proper time for saying them, because the Buddha has sympathy for living beings.

I find the final one the most interesting. Even if the Buddha knew a thing to be factual, true, beneficial and agreeable, he still sometimes didn’t say it because it wasn’t the right time.

One of the core values of the Unites States is freedom of speech. We believe that when people are forbidden to speak — rather than deciding not to speak, as the Buddha did — the truth can never be heard.

A couple of weeks ago, a white supremacist rally in Virginia erupted into violence. A woman was killed by one of the white supremacists who drove his car at reckless speed down a street crowded with counter-protesters.

Many people took this event as a sign that hate groups were on the rise and posed a clear and present danger to ordinary American citizens. Thus, rallies that were deemed by their opponents as similar to the one in Virginia were shut down in Boston and in San Francisco. 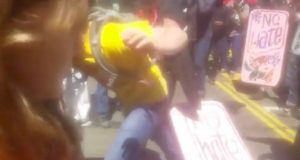 Nothing says “No Hate!” like a fist in the face! Berkeley yesterday.

Yet the organizers of the rallies in Boston and in San Francisco stated that they were opposed to white supremacists, neo-Nazis, the Ku Klux Klan, and other such groups. Their opponents thought this was a lie, and shut ‘em down anyhow. Just yesterday, in Berkeley, guys with signs that said “No Hate!” bashed people whose views they disagreed with over the heads. Because nothing says “No Hate!” like bashing someone over the head.

I’ve been reluctant to say much about this because I try, in my own half-assed way, to adhere to the Buddha’s criteria for speaking about such things. I’m not sure the Buddha would agree that what I want to say is endearing and agreeable. But I feel like maybe I have something to say.

The events in Virginia proved that there really are still white supremacists in America and that they are still capable of causing harm. But I saw something else, which I haven’t seen too many people talk about.

What I saw was that there are a hell of a lot more Americans who disagree with the white supremacist agenda than who agree with it. Even the mere rumor that a rally might be a forum for white supremacists brings out tens of thousands of people to shut it down.

So I’m not worried that white supremacists are a force of real political action in the US. It’s terrible that even a small number of those assholes can cause death and destruction. But it’s clear (to me at least) that their idiotic and hateful agenda won’t get far in this country.

And yet I will not be joining in the celebrations of shutting down these events. Because I still believe in the American right of assholes to say asshole-y things. I think the truth is more powerful than asshole-dom.

There’s another aspect I see to all of this, which I find very troubling. And that is how easily people are tarred with words like “Nazi” these days.

And that’s my fault. At least partially.

Sure, there really are Nazis. But what is the ratio of actual Nazis to people who have been called “Nazis?” 10 to 1? 100 to 1? My guess would be more like 10,000 to 1. I say this as someone who has been publicly labeled a “Nazi” and who has falsely called many others “Nazis.”

For much of my adult life, I was one of those people who routinely called those I disagreed with “Nazis.” And, like most folks who use the term so broadly today, it was those who would describe themselves as politically conservative that I called “Nazis.”

I am deeply ashamed of this.

“All my (not so) ancient twisted karma, born of body, speech, and mind, I do fully avow,” to paraphrase the Buddhist precept ceremony. 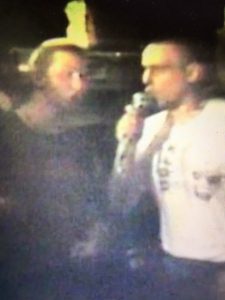 Jimi Imij of 0DFx (left) shares the mic with Dave Dictor of MDC (right, in 0DFx t-shirt) singing “John Wayne Was a Nazi” in 1983. John Wayne was not a Nazi.

You know that chant “No war! No KKK! No fascist USA!” everybody yells at marches? I was shouting that before most of the folks I see screaming it nowadays were old enough for Big Boy Pampers, and when former friends who try to school me about this stuff were tossin’ back brews at frat parties.

The chant was invented by the band MDC (Millions of Dead Cops). Zero Defex (0DFx) played lots of shows with MDC in the early 80s (the video linked above is one of them). At one point, there was a plan for us to release a split EP with MDC on one side and 0DFx on the other. I think Jimi, our singer, still has the master tapes.

I called Ronald Reagan and his whole cabinet a bunch of “Nazis” many times. I called everyone who voted for Republicans “Nazis.” Maybe it’s my karma to be one of the many folks nowadays who aren’t even close to being a Nazi, but have been labeled “Nazis” anyhow.

As a Buddhist now, I deeply regret ever calling someone that I knew full well was not a Nazi a “Nazi.” That was not right speech.

Thirty-odd years ago, it seemed harmless enough to call Reagan, his pals, and even his entire voting bloc “Nazis.” There was no reason to imagine anybody’d ever take us seriously. Things are different now.

I don’t say this to assuage my personal guilt, but to remind anyone who might read me now that things have changed drastically. In 1982, nobody was gonna get killed or even get their asses kicked just because someone in a punk band or a Xeroxed ‘zine with a circulation in the dozens called them a “Nazi.” These days, it can have real consequences.

Instead of shutting the jerks down, I’d rather have white supremacists open their views to public criticism. Rather than bottling their stupidity in their own little cybernetic echo-chambers where only those deranged enough to agree with them ever go, let ‘em have a speech on the Boston Commons or Golden Gate Park. Let them make all their points. And then follow that up with another speech of our own in which every point they make is dissected and demolished publicly.

Do we really feel like there’s any actual danger we’d lose such a debate?

And what about people who really do have something to say that’s not remotely white supremacists or whatever, but who have been labeled as such by someone who doesn’t want them to be heard? It shuts down discussion that might be valuable and necessary when someone who is nothing like a Nazi gets called one.

Why do we do this anyway?

Is there any real bravery in standing up to imaginary “Nazis,” the folks who’ve been the enemy in every major movie since before your grandparents were even born? Is it easier to call everyone we don’t understand a “Nazi” than to listen to views that make us uncomfortable and then try to formulate why they’re wrong? Are we, perhaps, terrified that we might be convinced by ideas different from the ones we hold dear? Are we so unconfident of our own beliefs that we need to shut down anyone who might disagree before they even get a chance to talk? And if we are so unconfident, could it be that it’s our ideas that need re-examining?

I am deeply suspicious of people who’d like me to believe that anyone who disagrees with them is evil.

TONIGHT August 28, 2017 at 8:10pm Pacific Time, my Q&A at Angel City Zen Center will be live-streamed. I will take questions from viewers.

Real Nazis suck ass. Your donations are my main means of supporting my teaching. If you find a little bit of truth in what I’m saying remember that even a small donation helps. Thank you!