I Want to Go Home! 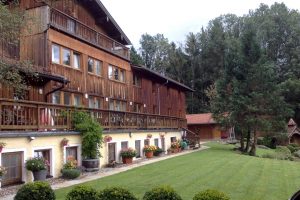 Sorry for the lack of posts lately. I’m on a tour of Europe and not everywhere I go is equipped with wi-fi. Or else sometimes there is wi-fi, but getting my American laptop to communicate with the foreign signal is a Zen-like exercise in learning to face failure and futility with quiet serenity. And then failing at that too…

Today is the first day of a five-day retreat at Domicilium, a Zen retreat facility and hospice in Weyern, a small village just south of Munich, Germany. It’s lovely and tranquil here in the Bavarian hills, with the lush greenery of late summer just starting to show the first signs of the coming Autumn, everything bathed in cool rain. The view out my window as I type this is rolling hills covered in pines and oaks, morning mist wafting upward in a gentle breeze. You should be here. It was open to you.

I fucking hate it.

Of course, I do not hate Domicilium. It’s a lovely place with great people and a very strong, sincere practice. What I hate is how I’m reacting to all this wonderfulness.

Nothing works here. I mean, I guess it does work. I just can’t figure anything out. I must’ve spent twenty minutes last night trying to open a tube of toothpaste before I gave up and made do with the residue left on my brush. After a similarly epic struggle with a duvet cover that made no sense I finally shouted, “Well fuck you then!” and tossed it back on the bed. Every little thing seems to turn into a grand test of my barely adequate brain power to come to terms with some mundane task that should not be even a minor difficulty. And don’t even get me started about jet lag and the intense headaches that always provokes.

I’ve been traveling all my life. When I was seven, my parents decided to move us to Africa. Just when I’d finally figured out how to deal with life in Nairobi, we were whisked back to Ohio and I had to contend with a society that saw me as one of them when I had no clue as to what had been happening in my supposed “hometown” for the past four years (nearly half my life at that point). I was branded a freak and a loser although I’d already bested challenges that would have turned my so-called “peers” into puddles of jelly — every single fucking day, you Midwestern morons. And that includes you smug know-it-alls on Facebook still trying to school me on the “right opinions” even now, when you haven’t got the first clue what’s going on outside your little Ohioan bubbles.

Then in my twenties I moved to Chicago, which was nothing like Akron except that they spoke roughly the same language. After a few years there and a brief stint back in Ohio, I went literally to the other side of the planet and spent eleven years in Japan. And, just to make sure I didn’t get too comfy, when I returned to America I didn’t go back to Ohio, but to Los Angeles, California, which might as well be yet another foreign country.

If anyone could handle this kind of stuff, it should be me. After all, I’ve also devoted well over half my life to practicing Zen and learning that the Buddha Way is easy, if you just avoid wanting things to be any way other than they actually are.

But there are times when it just gets to be too much. It doesn’t make it any easier that I am expected to be the model of calm clarity wherever I go. No pressure at all in that!

And so I find myself with a decision to make. Do I spend my days wanting to be back home where toothpaste tubes make sense and the food may not be better but at least I know what it is? Or do I do what that old Buddhist poem says and ignore my desire for things to be other than exactly as they are?

If you want the truth, right at this real moment, I wish I’d never accepted the invitation to lead any European retreats. I wish I had the wherewithal to cut and run, to cancel the rest of my scheduled events, get a plane back home, and just hide under the covers eating Doritos for three weeks. That’s what I honestly and truly want right now.

In Finland, someone looked at my schedule and said, “It’s your ango!” An ango is a long Buddhist retreat where you do a bunch of meditation intensives in a row punctuated by periods of work. He was right. And it doesn’t even end when I get back, because I’m leading a retreat outside LA and then another up in Toronto almost immediately upon my return.

Maybe my whole life is an ango.

I don’t know if it does any good. People tell me all the time that I’m “changing lives.” I don’t believe them. As far as I’m concerned, I’m just doing what seems necessary. I’m not doing it for anyone else. I’m not doing it to save all living beings. I’m doing it because it feels like this is what life requires of me. It feels like this is the role I’ve been given to play this time around.

It’s not a bad role. There are certainly worse. It’s not the best role, either. I’ll never get rich. I’ll probably never own a home, or even a car. But so what? Lots of us don’t get those things. It’s fine. If I compare myself to people who seem happier, I feel shitty. If I compare myself to people who seem worse off, I feel even more shitty for not feeling as shitty as they do. The only sensible course of action is not to compare myself to anyone else. Because I’m not anyone else. And no one else is me. No comparison I could make would mean anything anyhow. So, why bother?

I guess there must be a lot going on in the “real world” right now. I’m sure the President has said something outrageous, or somebody has blown up something, or protesters have protested some heinous injustice, or some celebrity has died*, but I wouldn’t know. Like I said, the Internet out here is barely adequate and I shouldn’t be logging on anyhow, except that it’s part of my job.

The one thing I like about retreats is that you get away from that shit for a little while. You should try it some time. Just log off for a while. I guarantee you won’t miss anything important.

I gotta go now. I think I’m supposed to give a talk about some kinda Zen thing. Maybe I’ll post another blog in a few days.

*Rest in peace, Grant Hart, your music meant a lot to me when everyone else sucked so bad.

The more donations I get, the more I can stay home and not travel all the time. Your donations are my main means of supporting my teaching. If you find a little bit of truth in what I’m saying remember that even a small donation helps. Thank you!