I saw two movies this week and if I blog about them I can justify writing off the ticket prices (and the nachos!) on my taxes. So here goes.

On Wednesday night I saw JOHN CARTER. The one thing most people seem to know about this movie is how badly it’s done at the box office. It’s too bad that it’s faring so poorly with the public. Because it’s really not a bad movie. It fails to be as epic as it wants to be. But it’s good fun. My friend Dale, who read all the Edgar Rice Burroughs John Carter of Mars books when we were both in high school, says the movie is very true to the novels.

As a guy who writes books I feel like a little bit of a traitor for saying this. But maybe they would have done better to deviate a bit more from the original story. We know a lot more about Mars now than Burroughs knew 95 years ago. If some of that was taken into account perhaps the film could have been more science fiction than what it seems like to us now, a fantasy epic set in outer space. Although fantasy epics set in outer space do very well (Star Wars, for example). So what do I know? It’s impossible to say why people go for the films they go for.

I liked the film and I’m glad I saw it on a big screen. It’s the kind of movie that I can’t imagine would be nearly as fun on a DVD. Though that’s probably where most people will end up seeing it. 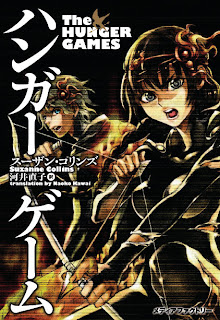 Last night I went out at midnight to see the first area screening of HUNGER GAMES. This film is based on a series of mega selling novels aimed at teenagers. As I might have expected I was one of about five people over 18 in that packed theater last night.

One aspect I personally find intriguing about the novels is that the paperback edition has a list price of $8.99 and sells on Amazon for just five bucks. (I like Amazon, but folks, support your local booksellers, that extra $4 helps your community) Regular paperbacks like mine list at closer to $15. Perhaps it’s because it’s a teen novel that it’s so much cheaper? But the only teen novel I’ve ever bought, Yvonne Prinz’s The Vinyl Princess, lists for $16.99 in hardcover (I don’t think there’s a paperback edition). OK. Whatever. Just a little aside there.

Hunger Games clearly has a lot more to say than John Carter. It’s a satire of the contemporary American Idol/America’s Next Top Model etc. etc. type show set in a nightmare post-some-kind-of-undefined-war-thing future in which the contestants have to kill each other for the cameras in order to win. The rich people in the big city enjoy the bloodsport at the expense of the poor folks who do the real work needed to support their lavish lifestyles. It’s all kind of surreal. But it’s not hard to envision our own future ending up something like this. Though I doubt it will ever get quite that bad. At least I hope it won’t.

Did the teenyboppers in the Highland Theater in Akron last night get that? It’s hard to say. I’m sure some of them did. I’ll bet most of them didn’t. But a large percentage of the audience seemed familiar with the books. They laughed at lines that could only be funny to people who’ve read them. I had to ask the person I went with, who had read the books, to explain what was funny about one of the characters threatening to cook her cat.

The premise of Hunger Games is quite clearly based on the Japanese film Battle Royale (2000) starring “Beat” Takeshi Kitano in which teenagers in a dystopian future also kill each other for the entertainment of adults. It’s not a remake of the Japanese movie. But the influence is unmistakable.

I hope the Hollywood people paid off the Japanese originators. Though the differences between the two films are so great that maybe they didn’t have to. These kinds of things are always very complicated. I’ve was involved in some of this stuff when I worked for Tsuburaya Productions. It usually comes down to whoever has the most power and money winning and has nothing much to do with any laws that might exist.

As for any kind of Zen perspective on these films, it’s hard to know what to say. Thich Nhat Hanh speaks out a lot about films and music that he thinks poison our minds. “We (writers) do not have the right just to express our own suffering if it brings suffering to others,” he says. “Filmmakers, musicians, and writers need to practice Right Speech to help our society move again in the direction of peace, joy, and faith in the future.”

I have a hard time agreeing with this. I do think that there are forms of entertainment whose sole purpose appears to be to excite people in unhealthy ways and generate profits. But almost every time I think I’ve come up with the perfect example of this, it turns out that either the makers of the thing had a higher purpose in mind than I’d imagined or that the fans of the thing got more out of it than I ever would.

I also think that many of the films, books and music that helped me get through my life — particularly my adolescence — would have probably been labeled “negative” by Mr. Hanh and his loyal followers. I can imagine him recommending me to watch Mary Poppins and listen to The Carpenters instead of reading Philip K. Dick and listening to the Sex Pistols. This would have ended up making me kill myself since I would never have known there were others just as dissatisfied with life as I was. At least that’s how I take what he’s said on the subject. And I’m certain I’m not alone in taking it that way.

In the case of Hunger Games, there’s a lot of violence and ugliness. But that ugliness and violence appears to me to be intended to make an important commentary on contemporary society. So it’s valid and good. You couldn’t make the points they wanted to make without all the bloodshed. John Carter is more just pure entertainment and spectacle. It’s not really trying to say anything at all. But it’s unpretentious and honest in its aims. So again, I think that’s also valid and good.

Sorry Thich Nhat Hanh fans if I’ve offended you again. I’m probably not allowed to do that either.