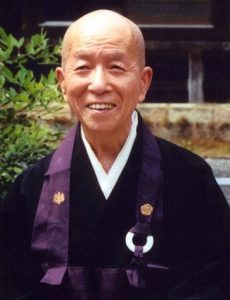 On this day, January 28th in 2014, my teacher, Gudo Wafu Nishijima Roshi died at age 94. My friend Rob reminded me of this, so I thought I’d try to do something to commemorate him.

About a month ago I did a talk at the Angel City Zen Center about Nishijima Roshi’s life. You can listen to it on the ACZC Podcast. Rather than repeat what I already said there, I thought I’d write about what I found to be one of the most fascinating aspects of Nishijima Roshi’s teaching.

When I was looking up something in Shobogenzo, I came across the following scrawled in my handwriting in the margins of the book. It said, “Matter is the name of sense stimuli. We have sense organs and feel stimulation from the external world. According to Buddhism, sense stimuli is one small image of the external world. We (Buddhists) distinguish matter and reality very strongly. This world is our action. Meaning, system, order, structure, (these) are the other side of the real world. The material world is an illusion. The mind plus the external world is reality.”

Whenever I went to one of Nishijima Roshi’s lectures, I took notes. I often wrote these notes directly into the margins of the chapters we were studying in my copy of Shobogenzo. Looking at the grammar of this note, I think I was trying to copy down exactly what Nishijima Roshi said.

I started attending Nishijima Roshi’s lectures because I wanted to know what reality is. I was not interested in religions that promised a wonderful afterlife. I couldn’t have faith in the existence of an afterlife or in Heaven or Hell. But the world I was living in right now did not require me to have faith in it. It was real. It is real.

But what the heck is it?

I guess most people don’t ask that question. They assume they know. Maybe they can’t explain how the world works, but they know what it is. It’s this! There is nothing particularly remarkable about this world. It’s mundane. It’s ordinary. It’s boring.

I didn’t think so. To me, the normal, ordinary, everyday world was really, really weird. Everything about it was bizarre. Human beings made no sense at all. The things most of them believed were clearly nonsense. I never could understand why people who were supposed to be smarter, or more experienced than me could fall for rubbish that I could see through instantly.

Nishijima Roshi was one of those people. And I was lucky enough to know him personally. I think you could even say we were friends.

Nishijima talked a lot about reality. When I first encountered him, I thought that he used the word “reality” to refer to the material world. That is, after all, what most people these days mean when they use that word.

That isn’t what Nishijima Roshi meant. “We (Buddhists) distinguish matter and reality very strongly,” he said. Matter is not reality. Matter is a way that humans interpret sense stimuli. There is an external world. But the external world may not correspond to the concepts we have about matter.

“Sense stimuli,” he said, “is one small image of the external world.” What we see, hear, feel, smell, and taste is not necessarily what we imagine it to be.

There is another side to the real world. This other side is not matter, not sense stimuli. Nishijima Roshi had a lot of different words he would use to describe this other side. Most commonly, he used the word “meaning.” I remember once he said to me, “There is matter and there is meaning.” Here he runs through a list of his other favorite words for this something that is real but is not matter. He says, “meaning, system, order, structure.”

He’s reaching out, trying to get his listeners to comprehend what he’s getting at. What he’s getting at is ultimately beyond words. It can’t be reduced to any of the concepts he throws out. It’s not quite meaning, although meaning is part of it. But it’s not exactly system. Order is close to what he wants to say, but not quite it. Structure might be another way of referring to an aspect of it, but no, that doesn’t work either.

Nishijima Roshi wasn’t a native speaker of English. I’m sure he used other words when he lectured in Japanese. But I got the impression that even if he went through every language known to man, dolphin, and alien, none of them would ever quite get it.

Even so, he tried. He placed tremendous value and importance on the effort to attempt to say these things, even if, ultimately, you were doomed to fail in the attempt.

Nishijima Roshi liked to flip that over and say that action was more fundamental than the world in which action takes place.

My mind was also blown when he said, “The material world is an illusion.” I had heard that idea before. Lots of Eastern philosophies espouse this same idea. For example, Maya is the Sanskrit word used by Hindu philosophers to refer to the illusory nature of the material world.

But Nishijima Roshi was all about reality. Not a reality that existed somewhere else, in some heavenly or spiritual realm. Not a reality that could only be perceived in some altered mental state, like after taking ayahuasca or something. But this concrete reality right here and right now just as it is. The reality that he often said was “directly in front of us.”

For someone who said those things to also say that the material world is an illusion… Well! I had no idea what to make of that the first time I heard it.

But he also said, “The mind plus the external world is reality.”

The contact between mind and external world is called sense stimuli. When we try to describe what the stimulations of our senses tell us, we come up with a theory of matter. Then we believe our theory is reality.

Nishijima Roshi questioned that theory. He didn’t accept it the way most of us do.

He didn’t deny science like many religious people do when they try to say that the dinosaurs were killed by Noah’s flood and things like that. In fact, he was very enamored of scientific ideas about the central nervous system. He thought that you could explain how zazen worked by referring to the way it balanced the sympathetic and parasympathetic nervous systems.

He did not deny science at all. But he did question one of the fundamental assumptions of most scientific people — the assumption that the material world is real.

Nishijima Roshi was a strange guy.

I liked that about him.

(Here is another story about Gudo Nishijima from my friend Peter Rocca.)