Last month there was a big to-do on the Interwebs over a high school kid having a stare-down with a Native American with a drum. Enough has already been written about that event. What I saw was a bunch of people who went to a place where conflict was likely to happen — an anti-abortion rally in Washington DC. As was to be expected, conflict did indeed occur. But no punches were thrown, no shots were fired, and everything was fairly peaceful, even if it was pretty tense.

Right now, a couple of bills are getting a lot of attention in the news in the USA. One bill introduced in Virginia seeks to make abortions legal through the third trimester of pregnancy, while another in Ohio seeks to make abortions illegal any time after a fetal heartbeat can be detected. And, of course, lots of folks are either worried or elated that Roe Vs. Wade could be overturned by a conservative majority in the Supreme Court.

This got me to thinking. Why are anti-abortion and pro-choice rallies in the USA places where emotions run high and conflicts are likely? Why is abortion such a hot button issue in this country? In Japan, where I lived for eleven years, such rallies are rare, and the subject of abortion mostly inspires apathy.

I addressed this issue in my book Sex, Sin, and Zen, but I’ve learned more since I wrote that book, so I thought I’d write some more on the subject while folks are thinking about it. I just finished reading a very interesting book called Liquid Life: Abortion and Buddhism in Japan by William R. LaFluer. It’s the only book I know of that covers this subject in detail.

Christians generally believe that people have souls. Hinduism has a similar idea in the concept of the atman. The immaterial atman is the true person, while the body is merely a vehicle for it to interact with the material world. Buddhism rejects that idea and says that we have no soul/atman. Rather, we are a combination of five elements — form, feelings, perceptions, impulses, and consciousness — that come together for a time and then come apart. 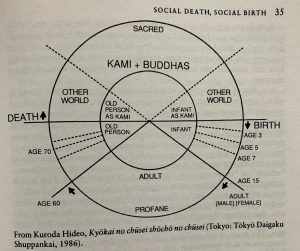 Buddhists don’t tend to look at it that way at all. Buddhists tend to view becoming human as a gradual process in which a being composed of those five elements I mentioned leaves the unseen world and enters our realm. This process is generally not considered to be 100% complete upon birth. Only after the person has passed through childhood do they become fully human. Also, the process of exiting our realm is generally considered to begin well before the person dies and is not completed until sometime after death. There’s a nice chart in LaFleur’s book to illustrate this idea.

This may be one of the reasons why abortion isn’t a hot button issue for most Japanese people. Even infanticide was seen as not especially immoral in medieval Japan. Fortunately this is no longer the case. But abortion has been legal in Japan since 1948, and was widely practiced and tolerated well before then.

Another major difference is that the Japanese have specific rituals for dealing with the trauma of abortion, whereas we Americans do not. The Bodhisattva Jizo is seen as the protector and guide for aborted children, who are referred to as mizuko— literally “water children.” Many Buddhist temples offer a ritual called kuyo, which is intended to pacify aborted children on their journey of returning to the unseen realm.

Sadly, these rituals have become a booming business in Japan in recent years. Abortion, being legal, is very common in Japan. A lot of temples specialize in kuyo rituals. Quite a few of these temples offer nothing else. This has forced a lot of mainstream Buddhist temples to offer such rituals in spite of their reluctance to condone abortion on principle.

The problem for Buddhists when it comes to abortion is that, although a fetus or even a baby might not be seen as fully human, it is seen as being alive. The First Buddhist Precept forbids the deliberate taking of any life. Still, in general, Buddhists tend to favor consoling bereaved parents rather than scolding them for their past actions. And so, Buddhist priests generally don’t take a strong anti-abortion stance even though they might be opposed to abortion.

Another big difference between Buddhism and most other religions is that Buddhism is not concerned with procreation or with the origins of human beings or the universe. Buddhism doesn’t have any agreed upon creation myth. In fact, many forms of Buddhism, including Zen, say that the very idea of creation is based on a misunderstanding of how the universe actually works and what time actually is.

Another factor is that the earliest Buddhists were people who had left their homes and families and taken a vow of celibacy. They didn’t have much reason to be concerned with abortion. Even after Buddhism began to become more “family friendly,” issues about marriage and children were usually left to other societal traditions and institutions. You could still say that Buddhists considered abortion to be wrong, but it wasn’t a wrong they were very concerned about.

In Japan, the moral ambiguity of abortion is openly acknowledged. This cultural acknowledgement of ambiguity extends to issues well beyond abortion. LaFleur quotes Takie Sugiyama Lebra who said, “The Japanese are used to sayings like: ‘Even a thief may be 30 percent right’ and ‘To hold a grudge against others is not good, but to do something that arouses a grudge is just as bad.’ The Japanese tend to hold everyone involved in a conflict responsible for it. The Anglo-American compulsion for a court trial … determines one person guilty and the other innocent.”

If you ask me, it’s this idea that abortion is either fully good or fully evil that causes we Americans to get so upset about it. The actual situation is ambiguous. It can never be resolved in such a way that either side is 100% right or 100% wrong. The argument cannot be won.

If I had to take a side, I’d say that personally I’m pro-choice. No matter what laws are passed, ultimately only an expectant mother can make the final decision of whether to abort or not. Therefore it seems best to me that safe and legal abortion remains an available option.

Still, I’m not about to join any pro-choice rallies because I cannot agree with the radical and ethically unambiguous stance pro-choice people so often take. Nor am I likely to ever join the pro-life crowd even though I agree with the general principle that abortion is the taking of a life and is therefore a violation of the Buddhist Precepts.

I also don’t want to be plastered all over social media if someone beats a drum in my face.