The new Godzilla movie (titled Shin Gojira or “New Godzilla”) premiered in Japan about 24 hours ago. The reports I’m hearing from fans over there whose opinions I trust are pretty bad.

I actually happen to like their new Godzilla design. It’s kind of creepy in a cool way. Godzilla hasn’t been genuinely scary, at least in terms of design, for a long time. However, I was highly disappointed to learn that the new Japanese Godzilla was not a man in a costume at all, but a fully computer generated creature. Even the 1998 American Godzilla was a guy in a costume for at least a few scenes (though the more recent US-made Godzilla was also completely CGI).

I’m not surprised to hear the new Godzilla movie is bad. I do not think it’s possible that there will ever be another genuinely good new Godzilla film. The best I’ve come to expect is that maybe they could make one that doesn’t totally suck.

That’s pretty much how I felt about the new Star Trek movie, Star Trek: Beyond. Immediately after seeing it I posted on Facebook that I liked it a lot. In retrospect, though, I think I was so relieved it didn’t suck dead donkey weenies that the movie seemed much better than it actually was.

I believe that the reasons there will never be another truly good new Star Trek or Godzilla may relate to Buddhism as well. And to our lives. And to why the present moment is such a precious thing.

It’s not real well known in the West, but Buddhism has a Second Coming myth much like the Christian one. Supposedly, the historical Buddha predicted that another Buddha would be born in the far future. This Buddha would be named Maitreya, he supposedly said. 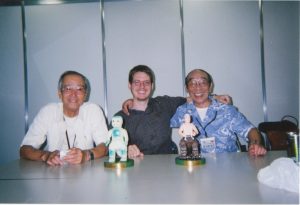 The principle creators of Godzilla were producer Tomoyuki Tanaka, director Ishiro Honda, special effects director Eiji Tsuburaya and music composer Akira Ifukube. You can think of them as The Beatles of Godzilla movies. The “fifth Beatle” in this case would be Haruo Nakajima, the man inside the Godzilla costume.

Of these five, only Haruo Nakajima is still among us, and he retired a long time ago. Just like you couldn’t make a real Beatles album with only Paul and Ringo, you can’t make a real Godzilla movie without Tanaka, Honda, Tsuburaya and Ifukube… and Nakajima.

I will grant you that there have been a couple of pretty good Godzilla movies made without these five men. Godzilla, Mothra and King Ghidorah: Giant Monsters All-Out Attack from 2001 was damned close. Its follow-up, Godzilla Against Mecha Godzilla, was also good. But to continue the Beatles metaphor, it’s sort of like Free As a Bird or Real Love, the “Threetles” tracks from the 90s, or some of the better faux-Beatle songs by other bands like Mr. Blue Sky by ELO. They’re close, but they’re not the real deal.

The Buddhists say that every thing that happens in this universe is a one-off intersection of the five skandhas (form, feeling, perceptions, impulses/actions and consciousness). Every moment is absolutely unique. It has never happened before and it won’t ever happen again.

Human beings are a very special type of animal. The more I learn about what gave rise to humanity as we know it, the more convinced I am that we are truly unique in the universe. Even if there are other civilizations on other planets, they won’t be just like ours. It was a “perfect storm,” as they say, that led to our evolution and dominance of this planet.

Godzilla movies are just a miniature version of what goes on throughout the universe and throughout time. Godzilla came about because of the unique events of Japanese history — the atomic bombings, the rise of science and the dangers of that rise which the Japanese people experienced in ways no other nation has, the new freedoms of the 50s and 60s, the rise of global communications and the novelty of that rise when it first happened, the unique lives of its creators, etc., etc.

You can’t make Star Wars again either, no matter how hard you try. You can’t re-do Batman or Spiderman or even Infra Man and make it even a tenth of what it was the first time around.

And you have got to be you. There’s no one else you can ever be. Each time you meditate, you are meditating for the very first time in all of the history of the universe. Same with each time you chew a piece of gum, or start yet another day at your lame-ass boring job, or say hello to the garbage man. No matter what it is you do, it is the first and last time that thing will ever happen.

Make it real. Make it count. It’s your only chance.

You can’t make a good Godzilla movie, but you can make a donation to this blog!