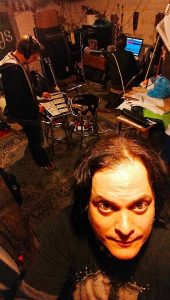 It’s all about learning how to see it. Once you understand how to see them, certain things become undeniable.

You probably think I’m talking about indoctrination into a belief system. That’s what people usually mean when they say things like this. They mean that if you learn to, for example, believe that the existence of planet Earth is an example of God’s power, you will see God’s handiwork everywhere on Earth.

I was in Akron last week to play a show with Zero Defex and to attend the DVD release of my movie Cleveland’s Screaming. While I was in Akron, I had a dream about death.

In the dream, I was contemplating the nature of death but from the point of view of the dream state, rather than the waking state. As I was waking up, I noticed that the dream world I’d been experiencing started to come apart, to dissolve, and the dream body I was inhabiting also melted away.

And yet I felt that something at my very center remained coherent. It was just moving from experiencing one kind of world into experiencing another. So the world around me seemed to crumble as I remained intact. Although “I” is probably the wrong word. Most of what the dream “me” would have thought of as himself was vanishing around him (me).

And it occurred to me as that was happening that maybe death is similar. To us, the living, dying people seem to be falling apart while we remain intact. They lose their minds. They say weird stuff. We go, “Awwwww… Poor guy! I’ll miss him!”

But perhaps the dying person sees it differently. Perhaps to such a person, it’s us, the living, who appear to be coming apart, dissolving, while they remain intact and a different sort of world begins to appear around them — even as everything they think of as theirs melts away. Maybe there are people back in my dream world having a dream funeral for me.

Of course, that could just be bullshit. Maybe it’s only my own wishful thinking seeping into the dream. Maybe I’m wrong. Maybe it was a silly dream, nothing more.

The point of telling you that story is that I think what is required by the practice I have engaged in most of my life is total honesty.

I could have told you that story in another way. I could have framed it as a revelation about the nature of death and dying. I could have eliminated any trace of my own doubts and presented it to you as if I had descended into death and brought back esoteric knowledge of its nature.

Some of you would have scoffed. But enough of you would have bought it. Shit. I could be a millionaire right now if I was better at convincing people that some of the insights I’ve had from my practice were Truth with a capital T. When I read the garbage other people make millions of dollars proclaiming as divine truth… hell… that’s kid’s stuff!

But if I did that I’d know I was cheating you, and I’d feel bad about that. Maybe a few million dollars could distract me from my bad feelings for a little while. A nice house up in the Hollywood Hills with a swimming pool and a view overlooking the San Fernando Valley can make you forget a lot of things, I’m sure. Hell, my 500 square-foot rented bungalow in Silver Lake often makes me forget a lot of things.

Akron, Ohio isn’t like Los Angeles. It’s always good to go back to where I came from and remind myself what the real America is like. If you spend a day walking around Akron you can see why people voted for Trump, and why the very same people voted for Obama before that. They want someone to fix it. They want someone to help them make their city work right. To make things OK again.

I stayed with a friend while I was in Akron, in an apartment twice as big as mine that costs less than half as much. I took my friend to Akron General Hospital on my third day there because he is a diabetic and yet he won’t stop drinking, which is destroying his pancreas. He’ll die from it if he doesn’t stop.

And yet, why should he stop drinking? He’s got two Master’s degrees and yet he can’t get a job. He’s a brilliant writer and yet nobody will publish him. He’s one of the best drummers in rock and roll, and yet he can’t find a band that can handle him. Because he’s also a diabetic alcoholic who won’t stop drinking and, as such, he’s a pain in the ass to work with.

Plus his city is a mess. Oh, sure, it’s way better now than it was a few years ago. But it’s still a mess.

Los Angeles is a mess too. But here you can pretend that one of these days you’ll be discovered and get to live your dreams. That’s why I moved back. Maybe one of these days someone will notice that I am, by any measure, the best living writer about Zen Buddhism in the English-speaking world.

You probably think I’m bragging. But I’m not. I am lamenting. The fact that I am better at writing about Zen Buddhism than anyone else currently in the field makes me deeply sad. I wish there was someone better. But there just isn’t.

If that’s not sad, I don’t know what is. Here’s the most rational and direct philosophical tradition to ever address the nature of man, God, and the universe, and the very best the English-speaking world can produce to write about it is some idiot who likes to watch Rick and Morty and collect plastic dinosaurs. That is seriously tragic. I am not joking.

And here I sit at my kitchen table. Father John Misty’s new album Pure Comedy is playing in the background. If he sticks around another twenty years and avoids getting too famous he might get to be as good as Robyn Hitchcock. Yet I fear that fame will destroy him before that happens.

They’ll try to kill you, Father John Misty. They’ll try to drown your brilliance with money and sex and power. You’ve already been on SNL, so it’s probably too late.

In a few weeks, there’s gonna be a thing here in LA called BuddhaFest. Of course, I was not invited. I didn’t even know about it till a week ago. Why would they get in touch with me? I don’t matter in their world.

It’s OK, though. I think it’s better if I don’t go to things like that. Places like that are where they suck the life out of good teachers and elevate bad ones to a kind of weird superstardom that makes them think they know something the rest of us don’t.

Your donations will help offset some of the poop-ton of money I spent on going to Ohio. If you find a little bit of truth in what I’m saying remember that even a small donation helps. Your donations are also my major means of paying my rent. Thank you!