Browse: Home / Us and Them 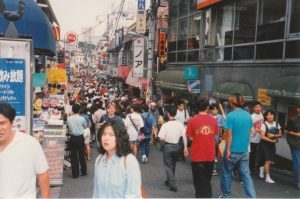 One of these people is not like the others, and it’s me.

In light of recent events I started thinking about my own life in terms of being an immigrant.

For 15 years of my life I was an immigrant and a racial minority; four years as a child in Kenya and eleven years as an adult in Japan. For the rest of my years I’ve lived as a citizen in the country of my birth who, by outward appearance, seems to be a member of the racial majority.

In Kenya and in Japan my status as an outsider was always obvious. I could not pass for an insider the way some of my ancestors who would normally have been classified as “black” were able to pass for “white.” Like most Americans, I am of “mixed race,” but can hide it. 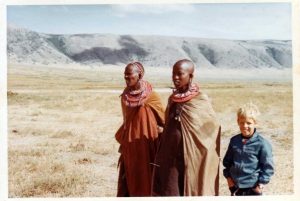 I’m the one on the right.

When, at age 11, I returned to the very white town of Wadsworth, Ohio after four years in Africa, I found that I was an outsider in my own country. I didn’t look like an outsider, being a blond-haired white kid, but I had missed a lot of important years of indoctrination into how things were done in rural, white Ohio. I hadn’t seen the Saturday morning cartoons, hadn’t had classes in American history, hadn’t learned what/who was cool and what/who was not, hadn’t even heard English spoken the way my classmates spoke it for four of the most crucial years of any young person’s growing up. The moment I opened my mouth I announced myself as an outsider, an immigrant to the country of which I was a citizen.

Then, when I was 29, I moved to Japan. Once again I was an immigrant and a racial minority. Once again I stood out wherever I went as an obvious outsider.

Japan has tough immigration laws. They don’t have a birthright citizenship law like the US. Even becoming a permanent resident is extremely difficult. I lived there for over a decade, had a Japanese wife, worked for a famous company, and spoke Japanese, and still the best they’d give me every time I applied for permanent residency was a three-year working visa.

While I lived in Japan I knew I’d best stay on the right side of the law. I was always hearing stories of foreigners like me who got deported for what Americans would consider very minor offenses, like possession of small amounts of marijuana for example. I also heard some horror stories of how foreigners who were arrested were treated by Japanese cops. I never got hassled by The Man (The Otoko?), but that might have been largely because I tried my best to accommodate to Japanese culture.

I was legal, but I knew a number of people who lived in Japan illegally. Usually they had overstayed their tourist visas and/or worked jobs there when they weren’t really supposed to. Some managed by leaving the country for a few days every six months in order to renew their tourist visas even though they maintained jobs and living spaces in Japan. Each time they left, there was a risk they wouldn’t be allowed back in again. And there was also a constant risk they’d be discovered and sent away.

I was genuinely surprised when I learned about the concept of Sanctuary Cities in the US. I never knew such things existed, or that I was living in one. I just assumed immigrants were treated more or less the same in the US as I and the foreign folks I knew were treated in Japan.

Trump’s recent immigration ban strikes me as a bad move for all the reasons you’ve read everywhere else already. So I won’t comment on it any further than that. I’m only saying this much so that this article won’t be misconstrued as being in support of the ban — even though it probably will be taken that way by the usual trolls who don’t bother to read things before they comment.

Instead I’d like to share some thoughts about what I think the concept of immigration even is and why it exists at all.

Human beings are territorial animals who, for most of our time on Earth, have survived by banding together in groups, since we are too weak and slow to live on our own in the wild. We have a far longer history as wild animals than as civilized creatures. We are largely ignorant of nearly one million years of our pre-history. But I believe it affects us much more strongly than the 5,000 years of recorded history we know about.

Different tribes of wild humans relied on the same resources. Disputes over territories were matters of life or death for entire tribes. So they were taken very seriously.

In the days before any of us humans could read or write, it must have been very difficult for a member of the Gugalug tribe to try to live in the territory of the Ugalug tribe. If such a person was discovered, I’m sure his life was in danger unless he could convince the Ugalugs that he was willing to abide by the rules of their tribe and to contribute to its welfare — including being willing to kill members of the Gugualug tribe should they attack the Ugalugs. If a Gugalug couldn’t be trusted to do this, the Ugalugs would be sensible to expel him from their territory.

The roots of what we now call “racism” must also have been planted at this stage. Since tribes were mostly extended families, members of a tribe would have learned how to recognize members of their own tribe on sight and distinguish them from members of other tribes. The ability to make such distinctions and the tendency to be wary of outsiders must be hard-wired into our brains.

It’s hard to overcome such hard-wired stuff. In fact, it’s probably impossible to totally overcome it. My guess is the best we can hope for is to learn not to respond in the ways that our genetic wiring demands we respond. This isn’t something that someone can just tell you about and then expect you to be able to do. You have to actually fight with yourself to make it happen.

I sometimes think about this in terms of wild animals. If a wild animal is raised among humans from birth, it can usually learn to tolerate them and be OK around them. If you try to tame an animal after it’s full-grown you’re going to have a lot more difficulty. Anyone who has tried to live with a feral cat knows how this goes.

I imagine humans are kind of the same way. If I’d stayed in Wadsworth, Ohio all my life, where the vast majority of the population is white, I might be afraid of members of other races. Not because I was a bad person — although I might also be a bad person — but because I am a social and territorial animal that has evolved to be afraid of those who might harm me and my tribe. It isn’t something I can just turn off.

In my specific case, constant exposure from an early age to other races and cultures has worn down my evolutionarily hard-wired tendency to be afraid of them. And yet those tendencies still arise sometimes. And when they arise, I have to fight myself to overcome them.

This is why I think America is one of the greatest countries in the world. It is certainly not perfect. It has a lot of unfortunate history. But it is one of the first countries to try the bold experiment of allowing cultures and races to mix. We have been getting better at this step-by-step over the past few hundred years. We have a long way to go. But the fact that we’re trying to do it at all is significant.

This is also why I can’t really blame people for being racists or being afraid of other cultures. To me, this seems like the expected response. It’s normal. It’s what we are built to do. When we overcome this tendency, that’s extraordinary and worthy of praise. To me, it doesn’t seem stupid or ignorant to be scared of other cultures and races. It seems natural. Overcoming that takes a big leap of faith in human nature. And given what lots of people of all races and cultures are like, that’s really asking something!

We’ve developed incredible weapons. The sole purpose of these weapons is to protect our tribes from other tribes. But nowadays we’ve got weapons that threaten our entire species. So we need to put a lot of energy into overcoming our fear of each other. It is absolutely necessary for our survival as a species.

How are we going to do that unless we live side-by-side? I don’t think there’s any other way.

And yet learning how to do this has not been easy so far and there’s no reason to expect it to be easy now.

Whatever race or culture you are, your donations are my major means of support. Thank you!