Browse: Home / ULTRAMAN DESTROYER and THE END OF HARDCOREZEN.BLOGSPOT.COM

ULTRAMAN DESTROYER and THE END OF HARDCOREZEN.BLOGSPOT.COM 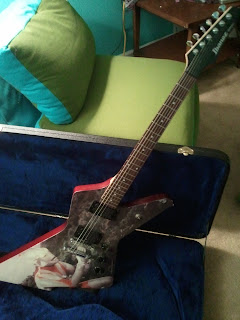 I just put my Ibanez Ultraman Destroyer guitar up on eBay. The bidding starts at the inconceivably low price of $1500. There were only two (2) of these guitars ever made. I designed it myself for a promotion Tsuburaya Productions teamed up with Ibanez for at the 2005 NAMM show. This is my own personal guitar and it’s very important to me. But I’m getting rid of stuff and this is one thing I’m getting rid of.

Go bid on it now. It will be up there for a week. And please, please do not get cheap on me people! This is one of a very small number of things I own that are actually worth something both personally to me and monetarily because of the incredible rarity of the item. Like I said, I designed it. I chose the Ultraman image and the guitar model it would go on, then placed the image where it is, then approved a test version and finally got me a guitar. This is probably my personal favorite image of Ultraman. One reason is because you can actually see a little of the man inside the costume (Bin Furuya) peering out through the mouth of the costume. It looks like maybe Ultraman has a tongue. But that’s really Mr. Furuya’s chin. It’s form the first episode of Ultraman originally broadcast in 1966. The photo used was printed from the original negative from Tsuburaya’s archives, not some cheezy JPEG some dude found on the Internet.

I played this quite a bit and recorded with it. But it has never been used on stage. So it’s like new, even though it’s technically a used instrument.

The money this generates will go to help pay for my upcoming move and for my friend Catie’s wedding since Catie has been storing this for a couple of years for me.

The URL of the eBay listing is:

The next bit of news I have to announce is that the blog you’re reading will soon vanish! But fear not. I’ve been working with my good friend Jayce for a few months now to design a brand new website that will be far better and more professional looking than this old blog.

I’ll have more specifics in the next couple of days. But I thought I’d give you a heads up now. The new website will go live in June and this one will go dead at about the same time.