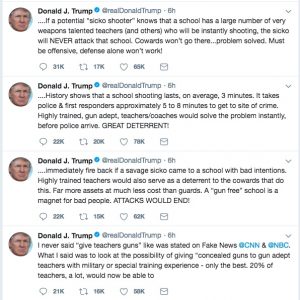 President Donald Trump issued a series of tweets this morning. They went like this:

I never said “give teachers guns” like was stated on Fake News. What I said was to look at the possibility of giving “concealed guns to gun adept teachers with military or special training experience – only the best. 20% of teachers, a lot, would now be able to immediately fire back if a savage sicko came to a school with bad intentions. Highly trained teachers would also serve as a deterrent to the cowards that do this. Far more assets at much less cost than guards. A “gun free” school is a magnet for bad people. ATTACKS WOULD END!

History shows that a school shooting lasts, on average, 3 minutes. It takes police & first responders approximately 5 to 8 minutes to get to site of crime. Highly trained, gun adept, teachers/coaches would solve the problem instantly, before police arrive. GREAT DETERRENT! If a potential “sicko shooter” knows that a school has a large number of very weapons talented teachers (and others) who will be instantly shooting, the sicko will NEVER attack that school. Cowards won’t go there…problem solved. Must be offensive, defense alone won’t work!

This is not a proposal to ensure the safety of American children from school shooters. It is madness proposed by someone who has not got the first clue what he is talking about.

My bachelor’s degree is in Teaching of History. I student taught at Mather High School in Chicago and then worked as a substitute teacher for the Chicago Public Schools and the Akron Public Schools. I applied for a number of teaching positions, but never got hired. It turns out that high schools in Ohio don’t hire history teachers. They hire football coaches who can double as history teachers. My girlfriend is also a teacher who has taught in the Los Angeles Unified School District and at a charter school also in Los Angeles.

Don Knotts as Barney Fife in The Andy Griffith Show

I can say from personal experience that the notion of school teachers as soldiers is so ridiculous it’s difficult for me to believe anyone would even propose it. I cannot picture my five foot two Latina girlfriend packing heat as she wipes snot off the noses of first graders, ready any minute to blast the head off any “sicko shooter” who might open fire on campus. As for me, I’d look like Barney Fife trying to fend off a school shooter.

Nor is the idea that 20% of America’s teachers be trained in firearms even worth considering. It is impractical and nonsensical. God help us all if this is the “solution” our country adopts.

Most school shooters shoot themselves after they’re done with their killing sprees. They go into it fully aware that they’re signing their own death warrants. The idea that they might get shot would just make the whole thing seem even more romantic and heroic.

Good God! Even the fact that I have to say that at all is exasperating!

I have been abundantly clear on this blog that I do not like Donald Trump and do not want him as president. As of today, I am completely in favor of any realistic measure that could end his presidency as soon as possible.

Upon seeing some of my tweets regarding Trump’s idiotic proposals on Twitter someone said it had been interesting to see me morph into one of those “Stand Against Suffering” Buddhist teachers.

So, I went back and re-read the post I wrote in April of 2017 regarding the “Stand Against Suffering” movement. I completely stand behind what I said then.

“Us Against Them” is a bad tactic. It is the ultimate non-Buddhist approach to anything.

As angry as I am right now, I feel I must resist saying that all members of the National Rifle Association are evil and have blood on their hands. Although I will say that Wayne LaPierre, the president of the NRA, is clearly deranged.

Nor will I blame “Republicans” or “Trump supporters” or any other group for the out-of-control gun madness that now reigns in the United States.

I refuse to take a stand against them.

I refuse to join The Resistance.

I’d like to. My ego is sitting there in the back of my head — or wherever it lives, in my ass maybe — yammering away that I should. But I do not trust that aspect of myself, so I resist listening to its demands.

I do not believe that the members of the NRA or the Republican Party or the folks who voted for Donald Trump are in favor of school shootings. I’d even venture to guess that there are probably a lot of them who recognize that what the president is proposing is so completely ridiculous it should never have even been spoken out loud, let alone decreed publicly by the highest elected official in the nation.

I believe that most of us want this madness to stop. We just disagree on how to make it stop.

If we are serious about this, then we have to also be serious about not letting our own egos take control of us and drive us to saying and doing things that only hurt our own case.

Much as we dislike it, we have to listen to what those we disagree with are proposing. We have to understand their arguments and be able to either propose a compromise or make a rebuttal that is sound and logical.

If we set up an “Us Vs. Them” dynamic, we have lost already. For reasons I am unable to comprehend, the United States government has a long history of doing exactly what the NRA tells it to when it comes to guns. If we try to go against that, we lose.

And if we lose, everybody loses. Even the members of the NRA.

Your donations will never go to any anti-gun campaign. They mostly go toward paying my rent. Every little bit helps. Those $5 and $1 dollar contributions add up!