Browse: Home / To All My Many Enemies Who Have Fought Me and Lost

To All My Many Enemies Who Have Fought Me and Lost 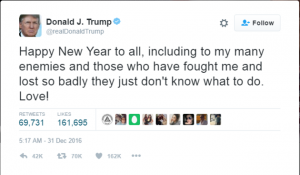 Happy New Year to all, including to my many enemies who have fought me and lost so badly they just don’t know what to do. Love!

As I said in those books, I had an overwhelming moment of deep understanding of the nature of the universe, and then walked to work to start a very normal weekday at the office. This happened after email had become one of the main ways we communicated with customers overseas. But, in those days, only one computer in the office could send or receive email, so we all had to take turns.

Because of the time difference between Japan and the Western hemisphere, we’d generally get a bunch of emails overnight that we’d look at when we arrived in the morning. Since I was the sole native speaker of English in the office it was my job to be the first to sort through these and reply to the ones I could reply to.

So, just after getting walloped upside the head by a profound experience of the direct and undeniable presence of God himself in a form that was at once utterly alien to anything my human mind could comprehend and yet deeply intimate and personal, my first duty was to sit down at the computer and read and respond to some emails.

What I noticed very clearly that morning was that I had a strong habitual tendency to insert my self (yes, I mean to type “my self” not “myself,” Spell Check hates me now) into these replies when it was not necessary.

Every time I was called upon to respond to any given email, there was this little sour feeling, kind of like an upset stomach. But not. That feeling was the effect of my tendency to identify with some abstract mental construct that I had, until that day, identified as me. This feeling tended to influence me to add some self to my replies. But it wasn’t really necessary.

Mr. Trump’s New Year’s Eve tweet was a little like the kind of thing I might have put into an email before that morning. I mean I wouldn’t have said those words, but I might have responded to my sense of self the way Mr. Trump responded to his a few days ago.

I don’t really want to go into an analysis of Donald Trump and why the specifics of his personal ego led him to insert the particular words he did. Other people have already beaten that horse to death. I think there’s something much more interesting and universal going on and I’d like to dig a little deeper into it.

I don’t recall what the first email I had to respond to the day of the incident at the river was about. But I do recall feeling a strong desire to put a little bit of self into the reply. Tsuburaya Productions used to have a Los Angeles-based licensing agent whose job it was to promote our shows in America. At the time I did not like their business strategies. So whatever I was thinking probably had something to do with that.

As I read their latest message and thought of my response, I realized that I could leave the me out of it and just respond to their question directly. In terms of Mr. Trump’s New Year’s Eve tweet, I could dump the part about my enemies and how I had vanquished them and just wish everybody a happy new year. So I did.

And it felt great.

It was weird how great it felt. Because before I did it, I would have predicted that I’d have felt some kind of loss from not sticking a little bit of self into that message. I expected to. But I was feeling a new kind of sense of what was appropriate so I left the me part out and hit “send.” Fwooosh!

Rather than feeling like I’d missed an opportunity to make an important statement, I felt, instead, like you do when you’ve been holding your breath for a long time and you finally let it all out. It was a sense of relief deeper than I’d ever felt about anything in my life.

I didn’t have to hold on to me anymore. Ever.

I fear that by using Donald Trump as my example, the responses to this blog might turn very partisan. That would be a real shame. Because Donald Trump is far from the only person who does this sort of thing, this inserting of self into places where it does not belong. We all do it.

In fact, it tends to be the only way most of us know how to communicate. But all we’re doing when we insert our own me into communication is muddying up the message.

We could all benefit from trying to notice when we do this and to stop doing it.

Your donations (even if you’re my enemy) are my major means of support. Thank you!