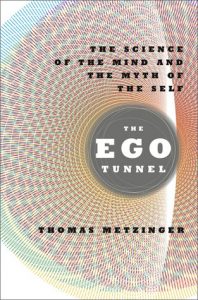 I’ve been reading a book called The Ego Tunnel by Thomas Metzinger. I heard about this book when I randomly looked for podcasts about science and philosophy to accompany a session on the elliptical machines at my local 24 Hour Fitness center.

The podcast I chose featured Mr. Metzinger talking about his book. He said he wrote it to try to convince his readers that there is no such thing as self. Since this is a hot topic in Buddhism, I decided to read the book.

Metzinger is German and I’m on my way to Germany, so I asked my friend Annette, who handles my German bookings, to see if Mr. Metzinger would be interested in meeting and chatting about this stuff. He was. We’re supposed to meet up in a couple weeks. I’ll let you know how that goes.

In the meantime, Mr. Metzinger sent me some other pieces of his writing. The one I found most interesting is called Spirituality and Intellectual Honesty (here’s the video version). In this essay he asks if it’s possible to have a form of spirituality that is intellectually honest. By this he means a form of spirituality that doesn’t involve the self-deception of believing in things that cannot be proven, things such as the existence of God, life after death, or enlightenment.

The essay is interesting to me because Metzinger takes a view of enlightenment that seems very similar to the one I talked about in a recent video on my YouTube channel called “Is Enlightenment Delusional?”

Metzinger contrasts spirituality with religion saying, “Spiritual persons do not want to believe, but to know.” Religion is about acquiring a system of beliefs that are often based on received tradition and cannot be tested. Spirituality, on the other hand, is a quest to know the deeper truths of life for oneself regardless of what tradition says.

One of the things that attracted me to Zen Buddhism at the very beginning was that it was not afraid of science. Other religions I had encountered before wanted to deny scientific discoveries and scientific understanding because science threatened their belief systems. Christians I met back in Wadsworth, Ohio said the Earth was only 6,000 years old and dinosaur fossils were put in the ground by Satan to deceive mankind. The Hare Krishnas said that men had not landed on the Moon but had mistakenly landed on a different planet because their scriptures said there were demigods living on the Moon and the astronauts didn’t meet them.

Buddhism does not fear science. As the Dalai Lama famously said, “If science disproves some aspect of Buddhist belief, then Buddhist belief must change.” But that does not mean Buddhism is science. Nor does it mean that the reality referred to by Buddhist teachers is the same as the material world as described by science.

Science is based on the materialistic view. It says that matter is true reality. It concerns itself with the study of matter. It’s also concerned with energy, but when science studies energy it does so from the standpoint that energy is essentially a material-like force that operates within the material world.

By contrast, most religions are idealistic. They study that which happens in the world of the mind or spirit. They’re concerned with ideas and ideals. They often insist that we are spiritual entities trapped inside a material prison.

Buddhism is radically different. Because of this difference it’s really, really hard to understand. It doesn’t fit either of these categories. It’s not materialism, but it’s not idealism either. And most of us have difficulty even getting our heads around that — myself included.

To get a grip on what that might mean, let’s take the notion of self and how it relates to what is often called “enlightenment” by Buddhists.

In his essay, Metzinger seems to be proposing much the same view of enlightenment as the guy who wrote the email I talked about on my video, namely that enlightenment is just an altered state of the brain and is, therefore, delusional.

I’ve written in a number of places (most notably in my books Hardcore Zen and There is No God and He is Always With You) about an experience I had while walking across a bridge on my way to work one day when I was living in Tokyo. Some who have read that stuff have called my experience kensho or enlightenment. I avoid using those words.

To be intellectually honest, in Metzinger’s view, I would have to accept that my experience on the bridge was merely a temporary alteration in brain chemistry and/or electrical activity and therefore delusional. Or, as the guy who wrote me that email put it, that it was a psychological coping mechanism and, again, delusional.

Metzinger quotes the British philosopher William Kingdon Clifford who said, “At any time, at any place, and for every person it is wrong to ignore or carelessly reject the relevant evidence for one’s own beliefs.” There is evidence that so-called mystical experiences are accompanied by quantifiable changes in brain states that can be observed and measured. This would indicate that mystical experiences are not real. They’re just weird and anomalous brain farts.

To which I say… maybe. Because this is a basically materialistic stance. The problem for me with the materialistic view is that it is based on what I think are some shaky premises. These are:

I find all of this dubious.

Of course, maybe I’m just fooling myself. Maybe I desperately want to believe that my mystical experience was real. Maybe I’m terrified that everything is actually meaningless and that all that awaits me later in life is pain, anguish, sickness, loss, and death, the final and complete end to all experience.

I accept all of this as entirely possible. And yet…

Let’s say my experience on the bridge was something that could have been measured and quantified if someone wired my brain up to an EEG machine (or whatever) that day. Maybe it could have been. So what? Someday someone might invent a machine that can stimulate the brain to have experiences like that. So what? By asking “So what?” I mean “so what.” What does that actually indicate?

Metzinger cites studies in which people’s brains have been stimulated in such a way as to have out-of-body experiences and feelings of oneness with the universe. This must mean that such experiences are delusional. Right?

Here’s what Metzinger says about enlightenment experiences. He says, “it is important to realize, again and again, that there is a simple logical problem. If one concentrates only on the main phenomenological characteristic found in many reports about enlightenment experiences — namely, the dissolution of the self, the complete disappearance of the sense of self — then there is no reason to lend any credence to reports about such states because they are self-contradictory. If there was no longer a self, then who is reporting such experiences to us in the first place? If the experiential subject really disappeared, then how can autobiographical memories of the relevant episodes exist? How am I supposed to remember a state in which I did not exist as a conscious self at all? This is another reason why reports about enlightenment experiences may not be as interesting as many think.”

Dogen believed it was inadequate. His philosophy is full of logical contradictions. In terms of Western philosophy, in which contradictions are seen as evidence of flawed thinking, Dogen was clearly a nut job.

Could it be that the problem is that the concept of “self” or “soul” is mistaken, and yet there is something in our real experience, and the only words we have for this something are mistaken words like “self” and “soul?”

Another piece of evidence Metzinger offers for the unreality of mystical experiences is that, “reports (of mystical experiences) only resemble each other in certain characteristic traits, but never in all of them.” Further along he says, “From a philosophical perspective, there are no good arguments for saying that a single, well-defined, culturally invariant and theory- and description-independent state of consciousness that is ‘the’ enlightenment exists.”

He’d probably find good examples in the way my two teachers, both from the very same tradition, expressed their experiences. My first teacher said, “It’s more you than you could ever be.” My second said, “My personality extends throughout the universe.” Now there’s a grandiose claim! Yet, after my own experience, I found both of those descriptions to be clear and not at all contradictory. To make matters worse, I probably wouldn’t use either of these expressions to describe what happened to me.

Language is based on shared experience. I have talked to my teachers and to other Zen practitioners about my own mystical experiences. No one has ever affirmed mine, by the way. They didn’t need to. But through these conversations, I have started to understand that what happened to me wasn’t just some weird hallucination that only I experienced. And when I read the words of practitioners of the past, I can understand that they too also experienced the very same thing. But when anybody talks about this stuff, they’re forced to use languages created by people who have not had these experiences.

Our mystical experiences aren’t all exactly alike, in spite of what I just said about them being the same thing. Just like the time you lost your virginity wasn’t exactly like the time I lost mine. But we can still describe both of our experiences as “losing my virginity.” We can agree that an experience called “losing one’s virginity” is a real thing.

Someone who has never lost their virginity may doubt this assertion. Maybe we could never convince a so-called incel that there is such a thing as losing one’s virginity. In a sense, those few who have had mystical experiences might be like a tiny tribe of non-virgins living in a world of incels.

Many people have talked about this mystical experience stuff for thousands of years to each other and have made attempts at creating ways to describe it. Dogen’s way involves the deliberate use of contradictions. Maybe there’s a better way. Maybe one day language will catch up and we’ll all be able to talk about this stuff without seeming delusional.

Of course, I could be mistaken.

May 28, 2018 VIENNA, AUSTRIA TALK: The Art of Sitting Down and Shutting up

I’ll get donations while I’m on tour, but they mostly cover travel expenses. Your donations directly to me are still important! That’s how I pay my rent. Every little bit helps. Those $5 and $1 dollar contributions add up!