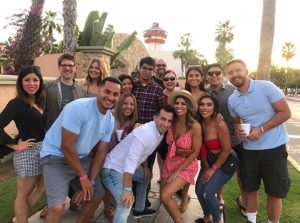 I spent Thanksgiving this year once again with the Leon family, the family of my girlfriend Adriana. I’m thankful to them for looking past the racial, ethnic, religious, and linguistic differences between us and accepting me as a part of their extended family of humans.

I’m grateful for the many others in my life who have not worried that I was an anomaly among them and with whom I’ve forged deep and lasting friendships in spite of our superficial differences. People from Mexico and Japan and Kenya and Iran and China and Korea and Finland, Germany, the Netherlands, Poland, Ireland, the UK, and so many other places have accepted me and called me their friend. Jews and Christians and Baha’is and Muslims have welcomed me into their homes, not worrying that I was somehow too unlike them. That means a lot to me.

There are lots of forces in this world seeking to divide us in terms of meaningless differences. Some do this in an overt way, foolishly proud of their skin color or the religion they were born into. Others do the very same thing while pretending not to. They say all the right words to score social points, but what they really want is a multicolored version of bland conformity and blind obedience.

Both flavors of that ugly game are disgusting to me. It’s why I find terms like “white” and “people of color” deeply offensive and worthy of mockery. Terms like those reduce all of our real diversity to silly categories that I cannot accept because they are untrue.

I like the fact that not everyone thinks the same way or speaks the same language. I like the fact that I cannot make any assumptions about anyone based on the color of their skin, the language they speak, or the gods they worship. I enjoy my conversations with conservatives and liberals when they’re sincere and honest and willing to really examine their own beliefs. When they’re not afraid of others who question those beliefs because they know that what is true is not always what they believe or want to be true.

It’s not always easy, but it always helps contribute to making everything a little better.