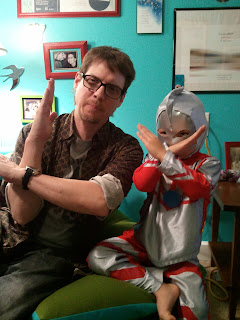 So I pared the contents of my storage space down to ten of what the US Postal Service calls “large” Priority Mail boxes. They’re really not very large, if you ask me. The dimensions are 12 inches x 12 inches x 5 1/2 inches. Those of you reading in countries where they use the metric system, please do your own conversions. You can’t even get record albums in them because the dimensions are just a hair too small.

I was able to do this because of the cooperation of my good friend Catie Braly. I gave her the authority to tell me to get rid of my stuff. I voluntarily submitted to her. And I paid her for this service. I told her that I’d split whatever I made from selling my stuff and give her half. She probably would have done it for free. But I would’ve felt shitty about that, especially since she’s trying to get money together for her upcoming wedding.

Our arrangement resembled what happens when one hires a personal fitness trainer, a martial arts instructor, or when one works with a Zen teacher. You willingly submit to authority in order to do something that you find yourself unable to do alone.

In my case, I had a strong attachments to what was in that storage unit. It wasn’t a lot of stuff compared to what most American males my age own. But it was stuff I’d spent years acquiring through long travels and through personal connections. There were things in that storage unit that certain nerdy people would just about kill for. Some of the items I managed to get my hands on while I worked at Tsuburaya Productions were made available exclusively to employees of the company. They trade for handsome amounts of cash among Japanese collectors.

Now I had to get rid of it and there was really no way to sell it to the people who would actually pay what it was worth. Imagine you have a vintage Mercedes in mint condition, it runs great and there’s not even a speck of rust anywhere on it. But you’re in a land where nobody drives cars or even knows what one is. So you have no choice but to donate it to an elementary school where they’re going to gut it and put it out in the playground for the kids to climb all over. You can tell yourself “at least the kids are going to enjoy playing on it” all you want. Even so, you’re still gonna feel kind of bad about it.

But, as anyone who’s gotten rid of stuff can tell you, it also feels good to dump your junk — even if it’s good junk. If I didn’t know I would feel better once this stuff was gone, I wouldn’t have enlisted Catie’s help to get rid of it.

I asked Catie to be ruthless and she was. Whenever I said, “I want to keep this,” she would ask why. When I gave my reasons, she’d ask why again. With her help I was able to get rid of a lot of things I probably would otherwise have kept. We established a safe word — “watermelon” — which could be used if I really couldn’t let go of some particular thing. I only remember using it once. That was when I found an old issue of Freakbeat magazine containing an interview with me during the days when I was making the Dimentia 13 albums.

In Zen training, you have to accept a certain amount of authority. I know I’ve been outspoken in the past about questioning authority. And I stand by what I said. But I feel that the real problem is belief in authority. When you hire a personal trainer, or ask a friend to help you get rid of stuff, you don’t usually end up believing that your personal trainer or your friend is some kind of almost divine being who knows all and sees all. You view your trainer or your friend as an equal to whom you have provisionally granted a limited degree of power over you, usually in exchange for something.

Zen teaching relationships can also work the same way. You acknowledge that your teacher has some basis for being able to teach you. He’s had training and experience. Perhaps he exhibits some kind of personal charm or charisma that attracted you to him in the first place. That’s all fine.

But there is always a mutual exchange going on. Your Zen teacher is also learning from you. He isn’t learning the same things as you’re learning from him, or learning what he learns in quite the same way. But it’s not a one way street. It’s not some kind of mystical download from on high.

It’s important in these relationships to grant the teacher respect. But you should also expect to be respected in return. Each side of the relationship is different, though, and the ways in which respect is shown and help is offered by each side is also different

For example, last weekend I allowed Catie to be a bit short and curt with me. I needed someone to say a short, sharp “No!” to me. It didn’t always feel good to hear that. But it was part of the process. If I’d put forth my personal desires things couldn’t work out to my own ultimate benefit. So I had to allow someone else the authority to deny me what I thought I wanted.

In Zen teaching and other spiritual relationships, this aspect of mutual respect often breaks down into a kind of worship. I know there are schools of thought that say this sort of worshipful attitude can be used to benefit students. I don’t believe that.  That always seems like a perversion of what the relationship ought to be, even when such perversions are enshrined by tradition. It’s too easy for this to mess up both the students and the teacher. You end up with a teacher who owns a few houses and a couple dozen Lamborghinis but has lost sight of whatever made him a great teacher to begin with and a bunch of students who think the whole point is to purchase gifts for their beloved master.

Actually, the process last weekend was a lot easier than I’d feared it might be. I found it fairly easy to let stuff go. I guess all that zazen pays off sometimes. Even if it feels like you haven’t really grasped its lessons, sometimes things happen and you realize you have. 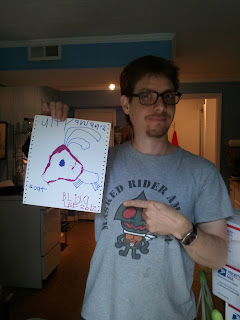 In the end, a little boy named Blixa, the son of Catie’s friend Drea ended up with a collection of Japanese monster stuff. Blixa is a big fan of Ultraman, having been turned on to it by his dad. That’s him in the Ultraman costume on the photo at the top of this blog. The stuff Blixa got might look like mere toys to the untrained eye. But most of it was not. He ended up with some high ticket collectibles that I sincerely hope he will not bash around as if they were $5 action figures from the local WalMart. But I have no way of controlling what happens to those things anymore. I have to be OK with that. And surprisingly, I am.

Just before I left, Blixa brought over a gift he’d made for me as his exchange for the stuff I gave him. It’s a picture he drew of Ultraman’s goat. I never even knew Ultraman had a goat!

That drawing is priceless! It’s one collector’s item I’ll be holding on to!

In the comments section someone said:
Aside from Baker Roshi… name another zen teacher who lives in opulence from the donations of their students.

It’s true that generally speaking Zen is mostly free of masters who live high off the hog from donations. At least in the West.

In Japan things are different. I found that most of my “normal” (ie, not involved in Buddhism) friends had no respect at all for Zen masters. The general feeling seemed to be that Zen masters were lazy rich people, driving around in fancy cars and working only when necessary to do funerals and other such ceremonies. They were seen as taking advantage of the poor and uneducated.

How much of this is actually valid, I do not know. Some of it surely must be true because the stereotype was quite common among people I knew over there. The people I knew who held this stereotype were generally young, educated artistic types. They viewed Zen masters in much the same way that same segment of the US population views televangelists.

I was also obliquely referencing others on the spiritual scene who are not connected with Zen, or who use Zen as just one piece of their smorgasbord. But I find it’s best not get too specific. There’s no point in riling up the followers of some guru by citing him as an example, especially when the problem is so pervasive. It’s not really necessary to name anyone in particular.