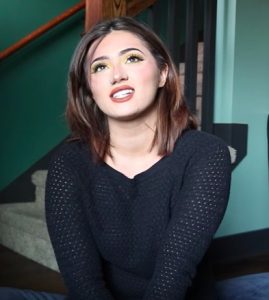 My niece Sky started a YouTube channel. You may remember Sky from the videos we did together a few years ago, like this one.

Actually, most of her videos aren’t about God. But the one I linked to above is. You can watch the others and find out what they’re about.

When I was 21, my thoughts about God were fairly similar to Sky’s. I had no religious background at all, probably even less than she does. But I wanted to believe in God.

I wanted to, but I couldn’t. The way God was presented by the people around me who believed in him just seemed silly. Sky believes God is a “cool dude.” But God, as conceived of by the people I met who claimed to speak for him, was not a cool dude at all.

But is God a “cool dude”? If you believe God is a magical being who could make the universe any way he pleased and yet created a world in which children get cancer, then God is not a cool dude at all.

If you’re a realist who wants to believe in God, you have to create a God you can believe in. The ancient Indians did a pretty good job of that. They invented the ideas of reincarnation and karma. That way, God can be righteous and good, but there can still be childhood cancer. You can explain such horrible things away by imagining that anyone who suffers in a seemingly random way must have done something really terrible in a previous life.

This worked for me for a while. But it started to unravel the more I looked at it. I mean, it makes a kind of logical sense. It works better than the idea of a God who grants you one life as a sort of testing ground then sentences you either to eternal bliss or eternal damnation. But it’s still really hard to believe. The evidence for it is sketchy at best.

Yet even Dogen, who was super realistic, seems to have believed in a variety of this idea. Why would he believe it? Was it just wishful thinking? Was he so deeply committed to Buddhism as a religion that he felt he had to accept it? Did he just not know any better?

None of these explanations work for me because they’re so out of character with his writings.

This type of meditation requires you to be extremely skeptical and extremely open. It also requires a certain amount of faith. If I had not met a living person who I could have personal conversations with who had done the practice himself, I probably couldn’t have mustered the degree of faith required to commit to a long-term intensive project like zazen that did not even promise — let alone guarantee — that it would produce results.

This form of meditation is called “just sitting.” It’s not about God realization, or Awakening, or any of that hubbub. It’s about diving into the pure experience of simply sitting still and staying still, and doing nothing more than just that.

You have to be skeptical because you want to be honest. If you go into the practice with very strong beliefs, those beliefs will be tested by your real experience. You need to be prepared for that.

How does God enter into it, then?

Of course, just because this would be true of the fictional character called “God” that we have created that does not mean it necessarily has to be factually accurate.

But I like it because it makes sense in terms of some of my personal experiences with this very open-ended form of meditation that I have practiced since I was a little younger than my niece Sky is now.

As it stands today, I tend to believe in God. I tend to think God is a “cool guy.” What I mean by that is that I believe God is the sum total of all the things we think of as good.

Evil may exist. It certainly seems to. And yet evil may be the result of that aspect of God that we call “limitation.” Limitation makes God blind to his own unlimitedness. Evil exists in God’s blind spots.

Sky has been bugging me to link to her videos, so I wrote this to justify the link.

Your donations are how you make God contribute to God! Or not. Every little bit helps. Those $5 and $1 dollar contributions add up!