Last Saturday, a crazy person with a gun shot and killed fifty people in a nightclub in Florida. But maybe the details don’t matter.

Of course those fifty people matter. What I mean is, in terms of this blog, maybe you’re reading this six months after I wrote it following the next mass killing in the USA by another gun-toting maniac. Or the one after that. Or the next ten…

When you’re a religious sort of leader-y type person, people look to you for words of comfort, explanation, or solace in times like this. I guess that’s what some folks were expecting of me. I don’t know. But I got nothin’.

I looked at a webpage full of “Buddhist Responses to the Shooting in Orlando” or whatever they titled it. The Dalai Lama said prayers weren’t enough, that we gotta do something. That’s true. I guess it’s good that he said that and didn’t go on some bizarre tirade about how the world is safer with fifty less homosexuals like some preacher did in Sacramento, or that he didn’t post a Bible verse about how “As you sow so shall you reap” like some politician did.

It’s just that I really can’t see where sharing that one quote where Buddha supposedly said “Hate is never conquered by hate, only by love” or telling us how your heart is overflowing with oceans of compassion for those slain helps very much.

I could be wrong. Maybe I’m just too cynical for that stuff. I dunno. I suppose if you feel that your community has been targeted by religious bigots it might help a little to hear some religious guy say, “Hey! Look at me! I’m religious but I’m not a bigot! I won’t shoot you with a military assault rifle!” It might make you feel a little better. Somehow. I just can’t make that make a lot of sense personally.

I do get it, though. If you have a sermon to deliver, you say the best thing you can think of. If someone shoves a microphone in your face and demands a comment, you try to give them something good.

As for me, I just feel numb and depressed. Mass shootings happen so often it’s impossible to come up with something new to say. It’s just a fact of life that our government will never do anything about what is clearly and unambiguously a huge problem with a very obvious and inarguable solution that has worked in every other country where it’s been tried.

Please don’t bother commenting about your Second Amendment rights. I get it. You won. You are in charge. You don’t need to remind me. I already know. 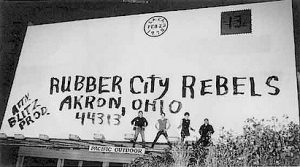 What makes it even more depressing is seeing so many people use this terrible thing as a way to boost their own brands. Especially religious people. Tragedies bring the crowds into the churches and synagogues and mosques and temples. Everyone in the business knows this. So when yet another mass shooting happens they jump on it the way my friends the Rubber City Rebels painted their own advertisement on an empty billboard on the Sunset Strip. You gotta take advantage wherever you can, I suppose.

Sometimes I think it’s a miracle this kind of thing doesn’t happen even more often than it does. Any crazy person in America can get a gun easier than he can get nasal decongestant. You got FOX News and all kinds of on-line fake “news” websites stirring everybody up 24/7 with fear-mongering nonsense. You have the presidential candidate for a major political party spewing the most toxic bullshit he can think of every opportunity he gets. Nobody can get a decent job. Everything is too fucking expensive.

You might have to bake a cake for a gay wedding! Your children are in danger of transgender perverts! There’s Zika virus in your boba drink! Your shoes are cultural appropriation! The Chinese are going to invade! Obama/Hillary is gonna take away your guns!!!!!!! Radical Islam! Raaaaadicooooool Iiiiiizzzzluuuummmm!!!!!!!!!!

It’s wonder you can go out at all without some crazy person shooting you for something. And yet we manage somehow.

My Zen teacher, Gudo Nishijima, really admired America. For a long time I resented him for that. I left the USA after getting attacked on the streets of Akron, Ohio, thinking the US was the most fucked up country on Earth. If those guys who jumped me had had a gun, I’d be dead now. No joke. Thank God they hadn’t gone to WalMart that afternoon.

What Nishijima Roshi admired about the US was the way so many people with so many very different cultures and points of view managed to get along. He thought that America was a model for the rest of the world. It is unavoidable that in the future more and more countries will become like the USA — a mixture of incompatible cultures and religions and ways of life trying to coexist next to each other.

For all our flaws, we do seem to make that work most of the time. When stuff like this most recent mass shooting happens we tend to forget just how well we get along with each other more often than we don’t.

I spent eleven years in Japan. Mass shootings don’t happen there mainly because they have sensible gun laws, like most of the civilized world. Believe me, there are plenty of crazy people in Japan. They just can’t walk into any corner convenience store and come out with a pack of mints and a military assault rifle.

But Japan is also a very homogenous culture. They are only just beginning to have to deal with people who are not part of a single ethnicity and way of life. In a few years we’ll start to see whether they can sustain their largely peaceful society when the nation doesn’t look as unified and monochrome as it does today.

The United States can do better. Obviously. But I think it’s pretty cool that we are able to do as well as we do.

I wish I had something better to say than that. You shouldn’t be shot for being gay. The shooter was most likely a closeted homosexual and being a closeted homosexual makes people crazy, so we ought to be more accepting. Love will conquer hate. My heart spills over with waves of pretty pinkish blue compassion. You know the drill.

Please try not to get too depressed. That’s what I’m gonna try to do.

Your donations to this blog will not be used to be assault rifles.