Browse: Home / No Justice No Peace?

No Justice No Peace? 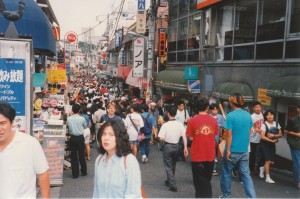 We are still having trouble with the blog. I can post again, but when you (or I, or anyone else) try to log in to comment it doesn’t work. We’re getting that fixed. For now, I decided it’s better to start posting again than to keep waiting. If you want to comment on this, you can follow my author page on Facebook and post your comments there. You can find it at:  https://www.facebook.com/BradWarnerHardcoreZen

My friend Jayce Renner and my first Zen teacher Tim McCarthy back in Ohio have signed an Open Letter Seeking Peace to the Cleveland Police Department. You can read the text yourself by following the link. The basic gist is that the cops need to stop doing bad things.

Like a lot of people, I was pretty horrified to see the rioting going on in Baltimore last week over the death of Freddie Gray at the hands of the police. It’s a familiar story we’ve seen in Ferguson, Missouri, in Los Angeles when Rodney King was beaten by the cops and elsewhere. Cleveland cops killed 12-year old Tamir Rice in a park for playing with a toy gun. Clevelanders reacted with remarkable and surprising restraint.

And today is May 4th. On this day in 1970 at Kent State University, where I did most of my Bachelor’s Degree, four students were shot to death by the Ohio National Guard. The security forces who were supposed to defend citizens were instead turned against them.

When I was researching my forthcoming book about Dogen (to be released later this year) I came across a statement in one of the works I consulted that took me aback. The author mentioned that in the era and place Dogen lived, 13th century Japan, there was no police force. I thought about that for a while because it had never really occurred to me. There was a government in Japan in those days and something we could call a military, but there were no cops.

In those days, if somebody robbed you or raped you or broke into your house, you couldn’t call 9-1-1. You couldn’t even flag down a passing officer of the law to help. If you wanted justice you could try petitioning the local government, but you weren’t likely to get any help very soon. The best you could do was to make friends with a samurai clan who might be able to avenge you. But even that was a long shot because they might already be pals with whoever wronged you.

Nowadays there are police forces pretty much everywhere. Some are far better than others. But for the most part it’s a system that works. And by that I don’t mean it’s perfect. Not at all. But it’s a better system than roaming samurai who work for the highest bidder.

Which is not to say that the cops don’t often do that too. But the important difference is that they are not supposed to. That is significant. The samurai had no reason even to try and pretend they were working for the good of all citizens.

We have cops now because we understand their necessity. I live in Los Angeles in a neighborhood where street gangs are still active. I am glad that there are police around.

Back in the Zero Defex days we sang a song called Go Blue Go Die about the abuse of police power (the link is to the version by Agitated who also did the song). The ending refrain is “Serve and protect? Bullshit! Bullshit!” But when our band was attacked by rednecks at a gig in Dover, Ohio, we called the cops and they kept us from being killed.

When police abuse their authority, everyone suffers, including the police. Their ability to exercise authority is eroded when people begin to doubt that the cops are really on the side of justice.

But there’s no reason for me to write yet another article that says the same things you can find all over the Internet. The more interesting question for me is; What can I do?

I’m a white male in America, part of the privileged classes. That has not always been the case for me. In Japan, being white meant that you were viewed as a potential threat. As a foreigner I did not have the same rights as most people around me. I never had a run-in with the police over there. But I knew very well that if I did, it would go much harder on me than it would on a person of the dominant race and culture. I was aware of the same thing when I lived in Kenya, that I was a member of a minority and that, as such, I was not accorded the same protection of the law as most of the people around me.

Those of us in the privileged classes need to be aware that things aren’t always the way we see them.

I don’t think there is an easy answer to the question of what to do about police injustice. Some people misunderstand the Buddhist idea of acceptance as a call for complacency. It is not. At the same time, the idea I’ve encountered that Buddhists must be politically engaged in a very specific way is not an idea I can agree with either.

I think we engage with the world in many ways we don’t usually acknowledge. It’s not all about mass gatherings and protests. The way you conduct yourself on a moment-by-moment basis is a far more powerful thing. You make a difference in society when you treat the people you encounter with respect and dignity. You make a difference when you recognize your own biases and refuse to act on them. You don’t have to post any hashtags at all.

Your donations to this blog mean a lot. Thank you!