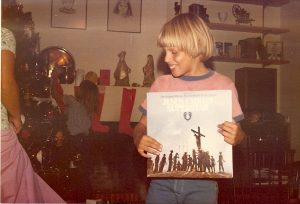 My Christmas present in 1974, at our house in Nairobi, a copy of the Jesus Christ Superstar movie soundtrack.

Today is the day when Christians around the world celebrate the birth of their Lord and Savior, Jesus Christ.

Most folks know these days that Jesus probably was not born on December 25th. The Bible doesn’t give any indication as to his birthday. The date December 25th was probably chosen because European pagans already had a winter solstice celebration that took place around that day — the calendars they used were slightly off, so they got that day of the solstice wrong.

I’m with my family this year somewhere on the outskirts of Nashville, Tennessee. That’s not where we’re from. But it’s where my sister lives these days, so it’s a reasonable location.

We’ve got a strange relationship to Christianity in the house. My sister’s first husband was Jewish. He still is, for that matter. So, my sister’s two children (now 27 and 21) were raised by a mom whose family were sorta kinda some type of Christian (I still don’t know what kind) and a Jewish dad of the reform variety — meaning no one kept kosher but my nephew did have a bar mitzvah.

My nephew considers himself a Jew, but he’s more culturally Jewish than religiously so. His sister, my niece, vacillates between embracing her Jewish heritage and celebrating her Christian side.

My dad doesn’t care about religion at all, as far as I can tell. He just has zero interest in the subject.

My sister has had periods of getting into a few forms of Christianity, and would probably call herself a Christian. But she’s not real devout about it. Her current husband was raised by a preacher dad and has a brother who followed his dad into the preaching business, but he remains skeptical.

My girlfriend’s family is from Mexico, and she was raised Catholic. But her dad thinks the church is full of crooks and pedophiles, so even though she had a confirmation, it never really stuck.

I’ve been interested in Christ ever since I saw Jesus Christ Superstar at a drive-in outside of Nairobi, Kenya when I was about 10 or 11 years old. But, try as I might, I could never become a believer. Had I encountered a more sophisticated form of Christianity than the kind practiced in rural Ohio, where I spent my teens, I might have become a Christian. But instead I found a Zen Buddhist who taught me more about Jesus than I could ever have learned in one of those churches.

Religions are just ways people have come up with to deal with the fear of death and the necessities of civilization. On the philosophical side, it’s driven by the knowledge that all of us, some day, are going to die. We’re not sure if any other animals know this. Maybe they do. Elephants seem to have rituals around death. Other animals may have their own ways of understanding it that we just can’t comprehend. On the social and ritual side, the purpose of religion is to get everyone in a close-knit community on the same page about following the rules that are necessary to keep their society from collapsing into chaos and disorder.

God is kind of like aliens. Either he exists right now, or he doesn’t. Whether we believe in him or not, won’t change the fact. I don’t think it’s important to God’s existence that we believe in him. But it may be good for the stability of society if more people believe.

I often wonder where Jesus fits in. I believe he probably existed. I’m sure he was not the Son of God except in the sense that we are all the sons and daughters of God. Although, when it comes to defining God, my take on the subject would probably be considered pretty eccentric. In any case, I think he was a guy who was deeply concerned about God. He lived in a society where a lot of people worried about the nature of God.

Jesus seemed to have a unique view of God. Or, at least, a unique view of God grew up around those who tried to follow his way after he was gone. I don’t think of Jesus as a final authority on God. But I do think we can learn a lot from the words attributed to Jesus on the subject of God.

Still, those words come from people. The folks who wrote the Bible were full of doubt and confusion, just like all of us. Like many of us, they tried to resolve their doubts by writing words they hoped were true. Maybe they thought they could make them true by writing them.

Today is a day to celebrate those people who tried to come close to God. Over at the local Wal Mart, where we did some last-minute shopping for Christmas dinner (there being little other choice in this neck of the woods), folks don’t even get time and a half for working today. The Walton family, who started Wal Mart, may be members of the Church of Christ, but they certainly don’t treat their employees in a Christian way. The deep hypocrisy of so many Christians is what turned me off from Christianity more than anything else. I cannot celebrate phoniness, greed, and double-standards.

But I think there’s more to Christianity than phonies like the Waltons, or politicians who mouth the words of Christ while robbing from the poor to fatten up the rich, or supposed preachers of Christ’s word who are the very kind of charlatans in fancy clothing that Jesus denounced. I think there’s still a good message in the words of Jesus, and that great depth can be found in those teachings if you’re willing to look deeply into them.

So, Merry Christmas everybody!

Your donations to this page paid my plane fare to Tennessee. Those $5 and $1 dollar contributions add up! Thank you very much for making my holidays better by making this blog possible! Your donations are my main means of supporting my teaching. If you find a little bit of truth in what I’m saying remember that even a small donation helps. Thank you!