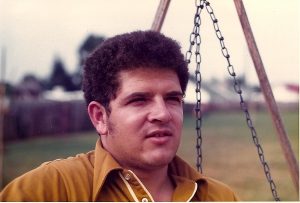 My father was born on June 5, 1941. I’m at Benediktushof, a meditation retreat center near Würzburg, Germany right now. I can’t call him to wish him a happy birthday because it’s too hard to get a decent phone signal out here. Besides, this is supposed to be a place of silence. So this blog post will have to suffice. I hope he sees it.

Writing down the date of my father’s birthday reminds me of something kind of ironic. On the day my father was born, no American would have dared to be as deep inside enemy territory as I am now. Hitler was at the height of his powers. My grandfather, his dad, was in the Navy, prepared to fight the Nazi menace. A lot has changed in 77 years.

One look at a photo of my dad will let you know that our family is obviously not of pure Aryan heritage. My sister and I look like plain ol’ white folks. Not so my dad. His mother had that hair too. This is something the family never discussed. At some point, my ancestors must have been happy to have been accepted as white and thought it was better not to give anyone reason to believe that wasn’t quite the case. 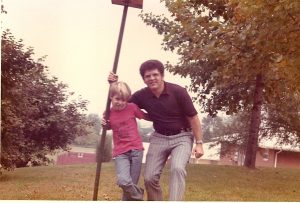 My dad got hired by the Firestone Tire and Rubber Company in Akron, Ohio not long after I was born. He had studied chemistry and worked there as a purchasing agent. He bought the stuff to make tires on behalf of the company. I always thought it was neat that he knew what tires were made of. I was fascinated by rubber samples he’d bring home from work. In 1972,  Firestone asked him to go to Africa.

I was eight years old and my sister was six. My dad asked my mom what she thought of the idea of moving to Nairobi with two little kids. She was all for it. So off we went!

Firestone had a policy for its overseas employees. They were allowed to have what they called “home leave” once a year. My dad thought it was a shame to use that opportunity to just go back to Ohio. So every year we went on trips through Europe instead. We visited Greece, Italy, Austria, Czechoslovakia, France, Switzerland, and Denmark, as well as Egypt and Ethiopia. I’m sure we went a few other places I’ve since forgotten.

Much later on, in the late 80’s and early 90’s, my dad was thinking of retiring in Mexico. So he made several trips down there and I tagged along.

I’m really grateful to my dad for making me a citizen of the world. Living in Africa and traveling extensively around Europe as a child gave me a perspective on things that I would never have had if we’d stayed in Akron. It also made it possible for me to live in Japan for over a decade without freaking out the way most of my gaijin friends did. And it’s made me able to withstand the weirdness of these once-a-year trips to Europe I do these days (see below for details, all events are open to anyone who wants to join). Thanks, Dad!

My dad was loyal to my mother all the way to the end of the long illness that took her life. He never liked to be told how extraordinary that was. But it really was. My aunts, who also suffered from the same disease, were not treated as well or as respectfully by their husbands. I will forever be in awe of him for that. 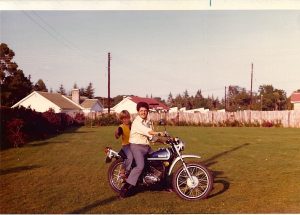 In our culture they say you don’t choose your parents. Some Buddhists say you do choose them. I don’t know which is correct. So I don’t know whether I should congratulate myself for choosing a good dad, or if I should feel lucky to have randomly gotten a good one. Either way, I feel like I did well.

In the last few years, my relationship with my father hasn’t been that great. I don’t really understand some of the choices he’s made in recent years. That has caused some friction between us. It’s made it hard to talk very much. That makes me sad.

But I still love him just the same. I hope he knows that.

Thank you for everything, Dad. And I hope you have a wonderful birthday!

I’ll get donations while I’m on tour, but they mostly cover travel expenses. Your donations directly to me are still important! That’s how I pay my rent. Every little bit helps. Those $5 and $1 dollar contributions add up!