Published by Brad on May 2, 2012 | 99 Responses
First up. Here is a very nice review of the new audiobook edition of Hardcore Zen. Thanks, Punk Globe!
But it’s not all positives! Oh no! Gempo Roshi has lashed out against the audiobook in this new video:
Also, Zero Defex has been hard at work on a video shoot. Here’s a still from what we did on Monday at Wadsworth High School (of all places). 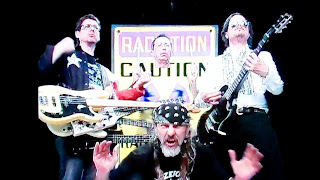 We’ll be playing in Kent, Ohio this Saturday May 5th, 2012 at the Stone Tavern 110 E. Main St. in Kent. The show starts at 9. We go on later than that, though. Come and see Mick Hurray’s head float through the air!

I got an interesting email the other day that went like this:

I read Hardcore Zen when I was in college about 8 years ago, thought it was pretty excellent and then promptly forgot about it.  In between my mind exploded, I was diagnosed with probably every major mental illness that existed and I’ve been drugged to the gills by people who think they are ‘helping’.  I heard voices and still do occasionally.

The only thing besides a really incredible wife that has really helped me not put a bullet in my head is meditation and Buddhism, even though I hate almost everyone and everything that surrounds it.  After losing my mind a few times, I remembered reading somewhere something to the effect of “I don’t understand why people that hear voices listen to them. I’d tell them to fuck off and get a body”.  And for a long time, I thought, whoever this guy is a total fucking asshole who has no idea what he’s talking about.  It’s about as funny as a dead baby joke to someone who actually has a dead baby., It’s bad advice, too.

So a few days ago I’m in a hippy-dippy used bookstore and I found your book and read it again.  And it resonated with me much more than it had 8 years ago, it’s a fantastic book and it’s wonderful to hear someone else’s frustrations with the bullshit that surrounds Buddhism.  And then I found the quote that had stuck with me so long – in your book – and it sort of reflected everything else about Buddhism – that most people in these communities don’t know shit about mental illness, they’re just terrified of it and want to get away from it.

Why am I telling you this? Not to pin the blame on you over one fucking sentence in a book you wrote years ago and not because I believe you are intentionally perpetuating this prejudice.  Because if you consider yourself a teacher, I want to tell you that statements like these, while funny and true, cut deep.  They drive away people like me that need to know reality and need to know they aren’t alone at the same time that many mental-health practitioners are pushing shitty drugs and Orwellian doublespeak under the banner of mindfulness.

This is how I replied:

I just recorded the audiobook version of Hardcore Zen and when I came to that line I wanted to change it. This was before I even read your email. But I left it in because I feel really strongly that people who change works of art suck. Like George Lucas did with Star Wars. Ugh!

The reason I wanted to change it is that I’m now a lot more aware of the realities of mental illness than I was in 2003. So I realize now that joke is not really very good. On the other hand, it’s an honest statement of what I thought at the time. I feel like that’s often useful even when it’s wrong. Does that make sense? If people are put off by that statement, maybe they should be. It shows that I don’t have all the answers and people ought to know that.

Anyway, I know now it’s not as easy as what I wrote. I think I knew it at the time too. I think possibly what I was getting at was the Buddhist notion that you have to learn not to believe your own bullshit. Not everyone hears actual disembodied voices. But everyone tells themselves things & then believes those things. We all need to learn to tell ourselves to fuck off.

Even so, these days a lot of meditation teachers still insist that meditation is a better treatment for mental illness than drugs. I tend to agree somewhat but only with some very significant reservations. I think ultimately, in the very long term, if one is extremely committed to meditation practice, with an exceedingly patient and loyal teacher, that meditation is probably a better way to go. But I think it’s extremely rare for all these conditions to come together. For example, I don’t think I could be patient enough to deal with a student who was seriously mentally ill no matter how dedicated he was. It also depends on the severity of the illness in question. These days medication for mental illness is prescribed for a lot of people who really don’t need it. That’s a whole debate in itself, which I’m not going to get into.

It’s kind of like dieting and exercise. I think it’s pretty clear that the best, most natural, least complicated way to slim down is through diet and exercise. But it’s a very different thing for someone who is twenty pounds overweight than it is for someone who is three-hundred pounds overweight. Somebody who weighs 450 pounds might die before diet and exercise could have a significant effect — even though he can take off twenty pounds through diet and exercise just like a slimmer person. He may therefore need something more drastic. Meditation and mental illness work something like that. But this is still a very incomplete metaphor.

In case people don’t get the joke with the video above, I was referencing a series called Ask Roshi. You can find several examples on YouTube. There’s one about The Law of Attraction in which Genpo tries to draw in fans of The Secret. There’s one on Why We Suffer in which Genpo identifies himself on screen as a “Zen Master.” Like I’ve said before, anyone who would use such a term except as a joke doesn’t have a single clue what Zen is about. These videos each have well over 10,000 views.

It’s really warped what the general public thinks is significant and serious in terms of Zen or meditation in general.  I aim to spend the next couple years doing some significant damage to this bullshit.