I’m a fair-to-middling cartoonist myself. During my late teens and well into my twenties  I very seriously worked at trying to become a professional comic artist. But I never really developed the necessary drive to become genuinely good at it.

I also became very deeply involved in religious matters around the same time. Had I ended up becoming a cartoonist for a living, I can easily imagine I’d have produced some of the same kinds of material that got eight cartoonists and four others who worked with them killed in France. Hell, it’s not inconceivable I’m on some fundamentalist whack-job’s hit list already. So this event both really pisses me off and scares the bejesus out of me.

The best commentary I’ve come across so far about this issue is an appearance by Ayaan Hirsi Ali with Anderson Cooper on CNN. She is an extraordinarily brave person saying things that really need to be said and quite literally risking her life by doing so. 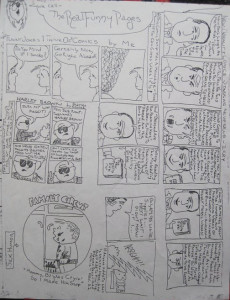 This is why I never became a professional cartoonist. I drew all of these. Impressed? I didn’t think so…

I do not believe that religion is the motivation for every bad thing that has ever happened in the world. That’s Richard Dawkins. Nationalism, racism, imperialism, capitalism, sexism and a host of other factors can motivate people to do bad things. But religion is clearly and inarguably the main motivation for this attack and for numerous others like it.

The matters addressed by religion – the deeper meaning of life, the nature of God, and so on – are personally important to me. I can’t say much about nationalism or colonialism or any of those others because they’re not my area of study. But I have spent a lot of the past four decades trying to comprehend why the same institutions who claim to be all about promoting peace and looking for the answers to life’s biggest questions always seem to end up being used to promote violence and hatred.

If you are going to storm into the office of a humor magazine, point a gun at a guy who draws cartoons for a living and shoot him dead, you have to believe that this is a good thing to do. These folks acted as a group, and that is also highly significant. If one lone nut-job does something like this, we can take it as an example of individual madness, as was the case with the man who shot two police officers in New York City last month.

On the other hand, here we have at least three people sharing a common madness. And although the French police are looking for just three gunmen, it is reasonable to assume that they were part of a larger group who supported them and encouraged them. I have seen at least one article questioning whether the attackers really were Islamists, but I think we need to get in contact with Planet Earth on that point and admit that there is no sensible reason to believe they were not.

Why would someone imagine it is a good thing to murder people who drew cartoons that offended them? This, to me, is one of the hardest parts to comprehend. My friends John and Tyler mistakenly believe that Captain Picard is better than Captain Kirk. Yet is an undeniable fact that Captain Kirk could kick Captain Picard’s scrawny ass halfway to the Klingon Homeworld. As wrong as they are, I don’t have any urge to kill my friends for their utterly erroneous belief.

What is it about religion that causes so many of us to think that offending someone’s ideas about fictional – or at least highly fictionalized – characters matters enough for anyone to really care very much about? How does someone get so wrapped up in a fantasy world that they are willing to do grievous bodily harm to those who do not share that fantasy world?

It’s all well and good to talk about how Muslims are a repressed minority in Europe and this leads to radicalization. It’s also true that the history of Western colonialism plays into all of this. And yet there is something specific and significant about religion that makes things very different. If only Muslims did stuff like this, we could say – as many do – that this is a problem with Islam. But I don’t think it is.

Shoko Asahara was able to turn a hodgepodge of Buddhism, Hinduism and New Age hookum into a motivation for a number of people to attempt a mass killing on the Tokyo transit system in 1995 (which I rode to work that very day). If you can get people to kill for a bunch of Deepak Chopra level faux-mystical candy floss, it shows that you don’t really even need the much-talked-about violent passages in the Koran to turn seekers of the Truth into vicious killers.

I think about this a lot because I do not see myself as being all that different from the guys who did this attack. I’m sure that, just like me, they rejected mainstream society and saw through its clearly empty promises. I am certain they left that world behind to seek something truer and better.

Like me, these men committed themselves to a higher truth, one that transcended what ordinary people define as morality and normality. They saw the hypocrisy at the heart of what the vast majority of people think of as “normal.” Like me, they turned to the ancient words of great people who also sought a higher calling.

I feel very much like I understand the men who slaughtered these cartoonists better than I understand most so-called “ordinary people” I encounter, the masses who completely buy into contemporary capitalist bullshit.

Where does it all go so very wrong? How can we work to change that?

These are vital questions. They are essential questions if we want to survive as a species and progress to become the best we can be. I know that sounds pretty grandiose, but I honestly believe it.

Something specific about religion allows people to get so deeply into shared fantasies that they act in ways they themselves know to be wrong, and yet are somehow able to convince themselves are good. The honest and real desire to do the right thing and discover the essential truth of life itself is corrupted into something ugly and dangerous. What is the connection?

After all these years of looking into it, I really don’t know the answer. Perhaps the answer is as difficult as the question.

As I always say at the end of these pieces, I appreciate your kind donations. It’s what makes my work possible and I could not do it without you.

I’m back in Los Angeles, so if you want to find me, I am at almost every event hosted by Dogen Sangha Los Angeles. Unless you’re a religious fanatic offended by this article, in which case I’m… uh… somewhere else.