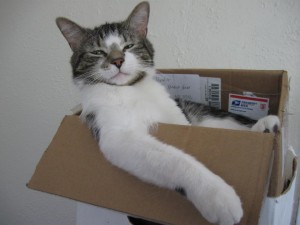 Crum in his box looking cool.

I’ve had a few male cats in my life. There was the late, lamented Shithead who would hump my foot every morning. There was Crum who lived with me in Akron and liked to bite my then-girlfriend’s toes in the morning when she slept over. There was Boy Kitty with whom I shared an apartment in Philadelphia. I am currently co-owned by Cosmo who also owns my friend Nina.

One thing all these cats had in common was this. Often, they’d wake up in the morning seeming sort of grumpy and listless. They’d mope around like that for the early part of the day. Then they’d disappear for a little while and suddenly reemerge all happy and bouncy and ready to take on the world. Before I caught on to the pattern I’d sometimes wonder why the big change. Then I’d smell it. They’d gone to the litter box and taken a big, big poop.

I don’t know if female cats do this too. I lived with one for a while, her name was Girl Kitty, and never saw her do it. Maybe it’s a dude thing.

But at any rate, I started thinking about so-called “Enlightenment” the other day and I realized it was just like when my cat friends poop. We may want to run around the house and bounce off the walls for a while after it happens, but we’re really just responding to the blessed feeling of relief that ought to be our birthright, but for reasons unknown is not.

Somehow we’ve become a species that lives in a constant state of constipation. We just fill and fill and fill ourselves with shit and have no idea how to get rid of it. Not only do we not know how to get rid of it, most of us don’t even know it’s shit and that what we’re supposed to do with it is dump it. Instead we hold our buttholes tightly shut, fearing to ever let go of so much as one precious drop.

Oh, a few people have managed to let a bit of it go. You’ve got spiritual celebrities like Ken Wilber and Deepak Chopra who have farted once, got terrified by the smell and tightened their buttholes up even more than the rest of us, but who have nonetheless spent the rest of their lives theorizing about what pooping might be like. You’ve got guys like Ekhart Tolle who have shit their pants once and insist on walking around years later in the very same trousers, inviting suckers to come have a whiff. They describe the chafing and burning discomfort of leaving all that smeared on their bums as if it’s glorious evidence of cracking the ultimate secret.

A real Zen Master* — as opposed to a dork like me — is someone who has not only figured out how to take a poop regularly, but even knows the value of using toilet paper and washing soiled undergarments. Often people make the mistake of thinking that just because these folks don’t stink, they therefore must not have actually pooped.

Me, I’m still learning how to clean myself properly and eat the kind of diet that allows me to get more regular. Someday I might get it right.

Sometimes someone asks a Zen Master, “Master, I think I pooped once. Let me describe it to you so you can tell me if it was poop or not.” They are dismayed to be told that if they actually had pooped, they wouldn’t need to ask.

In a way, then, in the land of the constipated, someone who knows how to poop actually is worth our attention and even some degree of reverence. But it’s not because they’ve achieved something extraordinary that the rest of us could never accomplish. It’s because, unlike the rest of us, they have understood how their body is actually supposed to function when it’s working right.

One of these days, once the knowledge of how to poop becomes something we teach to our children and spread around the world, we’ll look back on these current days with fascination. We’ll wonder how people back in the early 21st century and before ever managed to live at all without ever pooping in their entire lives. We’ll no longer view someone who knows how to poop and even how to clean themselves up afterward as some kind of amazing figure.

We’ll know that people like the Buddha weren’t godlike beings capable of extraordinary powers beyond those of ordinary people, but were actually people who understood what it was like to be truly and deeply ordinary.

Every Monday at 8pm  zazen at Silverlake Yoga Studio 2 located at 2810 Glendale Boulevard, Los Angeles, CA 90039. Beginners only!
Every Saturday at 9:30 am zazen at the Veteran’s Memorial Complex located at 4117 Overland Blvd., Culver City, CA 90230. Beginners only!

Your donations are important to me. They are my main source of income, far more than book royalties or retreat fees. You are my patrons. Thank you for your support!