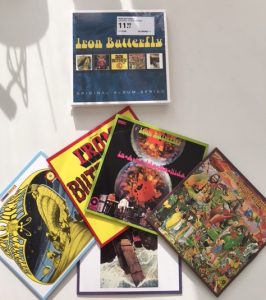 I bought these yesterday in Munich.

Some folks over on my Twitter feed are trying to drag me into yet another useless “discussion” on the question of drugs as Buddhist practice. Which is just d-u-m-b on so many levels. Not the least of which is the fact that the very format of Twitter makes anything like a real discussion completely impossible. But since this topic has also come up in my current European travels, I thought maybe it’s worth going over once again here on this blog.

A week-ish ago I was in Stockholm, Sweden. The group who have invited me there the past couple years includes a number of people who are interested in the idea of psychedelic drugs as a path to Enlightenment. I think the folks over on Twitter might be surprised at how civil I can be in discussing this with real people whose faces I can see.

I mean, I have to come down hard on self-styled Buddhists who run websites promoting drug abuse as Buddhist practice. That’s unforgivably irresponsible. You have no idea who you’re encouraging to blow their minds when you do that. I feel I have to “troll” such commentary if only just to remind people that it is absolutely impossible to justify drug use as Buddhist practice. It just is. It’s right there enshrined as one of the most fundamental principles of Buddhism that you cannot combine drugs with Buddhist practice. This goes right back to Mr. Buddha himself. There can be no debate on the matter.

If drugs are involved, it is not Buddhism. End of story.

On the other hand, Buddhism aside, if I believed there was any real possibility that one might be able to better understand the fundamental nature of reality by ingesting some substance that would open wide the doors of perception and allow one a glimpse of the Godhead, well, I’d probably ditch Buddhism and go look for a crusty guy hanging out in some shady neighborhood and get some of the “good stuff” for myself.

I’m not so attached to the idea of being a Buddhist that I’d pass over a better way if I thought there was one. Being a Buddhist is not very important to me, actually. So if it were a choice between being a Buddhist and getting a deeper glimpse into the nature of reality through some other method that was incompatible with Buddhism — like using drugs — then I’d definitely look into it.

In fact, I have looked into it. And, for me at least, it was dirt simple to see that drugs were not a good way to see reality more clearly. I did LSD a handful of times in my late teens/early twenties, and it was crystal clear even then that such a method couldn’t possibly lead where I was interested in going.

I don’t know why I’m so much smarter than people like Vince Horn of Buddhist Geeks and others when it comes to this. They seem like smart people in other ways. I think it might have to do with having a keener ability to call myself on my own bullshit than he and his pals possess. I’m not trying to brag here. I don’t take any particular pride in the fact of being smarter, more realistic, and far more honest than Vince and company when it comes to this. It’s just that I look at things and see that I am.

Like… OK… let me see if I can unpack my attitude a bit. Last year when I was in Stockholm, one of the people I hung out with was regaling me with tales of his DMT experiences. He claimed that, among other things, he had talked with aliens while on the drug.

Now I do not dismiss this lightly. You might expect me to, but I do not.

To me, it seems entirely plausible that there are aliens. I am, in fact, very interested in that possibility. Furthermore, it also seems plausible to me that advanced aliens could be capable of communicating directly mind-to-mind with humans. And, I will even grant the possibility that some kind of drug could facilitate such communication. I’ve read a few Philip K Dick novels, after all. Seriously, though. I mean it. I do not rule out the possibility that this could be true.

But if this is what’s really happening, why do these aliens always seem to just talk in dopey New Age clichés? Why, if they’re so keen on communicating with humanity, do they never say anything you couldn’t find in some hippy magazine? If they’re so advanced, why are they so dumb?

Furthermore, if drugs were the way “in” to a world of greater empathy and deeper understanding why did the Age of Aquarius turn out to be an age of burnt out bums listening to some of the most godawful music ever created? And I say this as a guy who just yesterday bought a boxed set of the first five Iron Butterfly albums.

Both my own experiences with LSD and my encounters with contemporary folks who believe trippin’ balls is the way to the Truth have led me to the inescapable conclusion that it’s all just deep self-deception, that any revelations one might have on drugs are just human silliness turned into technicolor wide-screen cartoons in the inner eye. Nothing more.

It’s a little like what Dogen says about the Great Miracle as opposed to “small stuff” miracles in his essay, Jinzu (Mystic Powers). There he talks about stories of supposed miracles performed by Buddhist masters of the past. He doesn’t deny the possibility that these things actually happened. But he says that they’re just “small stuff” miracles and are only possible within the Great Miracle that is existence itself.

To me, the insights one might get through drugs are small stuff insights. Maybe, in some very rare cases, they have some positive effect for a little while, at least until the high wears off. This definitely did not happen with Vince Horn or anyone at Buddhist Geeks, but maybe it happened to some others elsewhere. But I’m not looking for such shallow insights. I am interested in what I can discover about what the druggies often deride as the mundane and humdrum world of everyday life. That, to me, is the Great Miracle.

Why would I want to zip off to Alpha Centuri in the imaginary spaceship of the mind when Alpha Centuri is no more extraordinary than planet Earth? When my little “Alpha Centuri” is, in fact, just all the stupid movies I’ve seen about aliens recombined and regurgitated under the influence of a drug?

The fact that I exist as an “ordinary human being” is, in fact, not ordinary at all. This mind and this body, just as they are, without being altered in any way is a rare and extraordinary thing just as it is.

I’ve got a new book coming out soon! Stay up to date on my live appearances and more by signing up for our mailing list on the contact page!

UPCOMING EVENTS (ALL ARE OPEN TO EVERYBODY)

The more donations I get, the more I can stay home do drugs. I’m kidding! But it does help a lot. Your donations are my main means of supporting my teaching. If you find a little bit of truth in what I’m saying remember that even a small donation helps. Thank you!