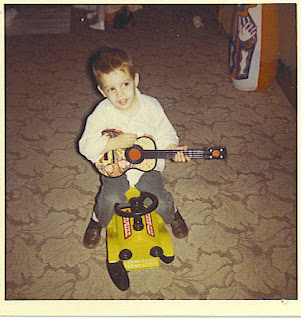 I’ve never really gone public with this. But I am a tremendous Monkees geek. It must have started early because that’s me at age six or seven with a genuine Monkees guitar — which would be worth a fortune now if I still had it. Alas I do not.

But I do have all of The Monkees’ albums, most of them in the Super Deluxe versions Rhino Records has been issuing for the past few years. The Monkees were a huge influence on me when I was making the Dimentia 13 records.

Long before it was available on home video, I went and saw a screening of The Monkees movie HEAD up in Cleveland. I was dumbstruck by the film’s theme song, “The Porpoise Song” and annoyed that the record was, in those days, utterly impossible to find. So I went home and attempted to rewrite the song for myself from memory just so I’d have it to listen to.

About a year later I finally managed to track down a record with “The Porpoise Song” on it. I discovered that my song, “I Am a Whale” was similar in style to The Monkees but was different enough that I used it as the last track on the first Dimentia 13 record. A video I made of the song is at the bottom of this page. You can click on the words “The Porpoise Song” in the paragraph above if you want to compare it to The Monkees’ tune.

So I was pretty sad to hear yesterday that Davy Jones had died. Davy wasn’t my favorite Monkee. He always seemed to sing crummy syrupy ballads like The Day We Fall in Love or Dream World. But he also sang lead on some of their best songs, like Valerie and Cuddly Toy. He also had the good taste to feature Neil Young as the lead guitarist on his tune You And I from The Monkees’ late period album Instant Replay.

It’s odd the way celebrity deaths affect you. I never met Davy Jones, though I saw The Monkees in concert a few times in the eighties. But he was important in my life nonetheless.

Just a day before Davy died there was a horrendous shooting at Chardon High School, just a few miles north of where I live. A maniac with a gun killed three of his fellow students and wounded two others. It’s a tragic story that happens far too often. It makes me sad and angry. I was one of those kids who hated everybody in my school too. But I never shot anyone. These things make no sense. Nor does the number of handguns in America. But don’t get me started on that one.

I feel like it’s probably more worthy to write a tribute to those kids in Chardon. But I didn’t know them. And in some ways I kinda sorta knew Davy Jones even if he didn’t know me. Besides that, the news outlets here in NE Ohio seem to be doing tributes to those kids 24/7. Some of which are incredibly awful.

At times like these people who are supposed to be spiritual teachers like to put some sort of spin on the news that ties it in with their beliefs. I hate it when people do that. So I’m not gonna launch into a sermon about impermanence or any such schlock.

I’m just sad that Davy Jones is dead. And those kids. And even that conservative blogger dude I never heard of until he died.