Dancing With Libtards and Fascists 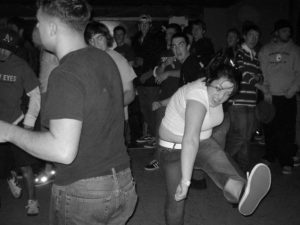 All of my life I’ve been a confirmed libtard. I was never as committed to the cause as some people. But I did join a hardcore punk band whose main songwriter at the time was a confirmed socialist. Or maybe he was an anarcho-syndicalist? I was never quite sure what that was, but I heard him use the term. Definitely on the libtard spectrum.

These days I’m less of a libtard, having seen many of “my own people” turn crazy-pants following the election of Donald Trump. I’d already been questioning the whole libtard mentality before that. But I started not wanting to affiliate with the crazier elements of that crowd, the people for whom seemingly everything is racist or sexist, the ones who use silly trendy terms to denigrate anyone they feel isn’t quite pure enough in their ideology.

For this, some of the folks in the Buddhist crowd started calling me “right wing” or even an “alt right Buddhist,” whatever the hell that is. So it goes.

But after all the recent shootings that’s changed. As I’ve mentioned on this blog many times, back in 2011 seven members of the family of a close friend were slaughtered by a man with a legally acquired gun. The guy never showed any overt signs of being a murderous psychopath before the day of the shootings. And don’t even try to tell me that if he hadn’t had a gun he would’ve killed them anyway. No. He would not have. Absolutely not.

Anyway, after the shootings in Las Vegas and Parkland, Florida, I’ve started being more outspoken on the need for better gun regulations. For which I am now being called a “cuck” and a “libtard” again. I wish the world would make up its mind!

I’m also being told that in order to voice any concern over the obviously terrible state of American gun laws one must be an expert in the minutia of gun terminology and able to recite the complete text of all gun regulations currently on the books anywhere in the nation. Which is ridiculous. You don’t need to know the details of road construction to recognize that that your car is being wrecked by potholes and that the bridges on your local highway are about to come crashing down.

Sorry for the digression. There’s a Buddhist point here, I swear.

Lately I’ve been making my way through a book called Living Yogacara by Tagawa Shun’ei, who runs one of the last remaining temples dedicated to Yogacara style Buddhism. That’s pronounced like yoga-chara, by the way. I don’t know why they forgot to put an h after the c.

Yogacara philosophy has sometimes been called “radical Buddhist idealism” by people who don’t really get what it’s about. The philosophical stance the Yogacara school takes is sometimes called “mind only,” which sounds like idealism. By idealism, I mean idealism in the philosophical sense of the word. In philosophy, idealism isn’t a different word for optimism the way regular folks sometimes use it. It means a philosophy that believes the basis of the universe is ideas or the mind or consciousness. Deepak Chopra would be a good example of a philosophical idealist.

The Yogacara school doesn’t believe that everything in the universe is all in the mind. Not exactly. But they do believe that whatever we know of the universe comes through our minds. They believe there’s no such thing as objective knowledge. This doesn’t exactly mean there’s no objective Truth. Just that we can’t really see the truth as it is without it being colored by our mental processes. They, therefore, believe that the study of the workings of the mind is the most direct way to understand the universe in which we find ourselves.

It’s complicated stuff, Yogacara Buddhism. It’s not easy to follow. The Zen school draws a lot on Yogacara philosophy, but tends to simplify it greatly.

“The material world is an illusion,” my teacher Gudo Nishijima once said in a lecture. That about knocked my socks off. But, according to the Yogacara way of seeing things, that makes sense. What we perceive as the material world is an illusion created in our minds that approximates reality, but is not reality. Even our best and most detailed scientific understanding of the universe is part of this illusion. It may work and be useful in making predictions. But we have to also be aware that it is illusory and fundamentally deeply flawed.

So what’s this have to do with being a libtard?

Well, one of the basic ways Yogacara Buddhists, like all Buddhists, understand the world and ourselves is that everything is interdependent. “All things exist only by virtue of their relationships with other things,” Mr. Tagawa says in his book on Yogacara Buddhism.

This is where I part ways with the mainstream of Buddhists in America these days. They do not seem to grasp this fundamental point. They align themselves with the libtard faction without seeming to comprehend that it’s only part of the equation.

They’re trying to dance with a partner without acknowledging that they even have a partner. And, of course, their partner also refuses to acknowledge that they too have a dance partner.

It makes for a very ugly and ungraceful dance.

Your donations won’t be sent to any lobbying organization. They mostly go toward paying my rent. Every little bit helps. Those $5 and $1 dollar contributions add up!