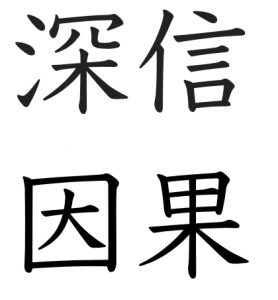 Shin jin inga, “deep belief in cause and effect”

Last week I wrote a piece about our forthcoming Zen and Yoga retreat at Mt. Baldy Zen Center April 5-7, 2019. Near the end of that piece I contrasted the things we talk about during lectures at our retreats with an announcement by the Brooklyn Zen Center about a forthcoming retreat called “Working with Collective Self and Collective Karma in Sangha.”

I found some interesting stuff on the Interwebs, which confirmed something I suspected. TL;DR — collective karma isn’t a thing. But there’s more to it than that.

It turns out that the term “collective karma” is nowhere to be found in ancient Buddhist sources. It appears to be a term coined in the early 20th century by Madame Blavatsky of the Theosophical Society. Madame Blavatsky was notorious for, shall we say, re-imagining a lot of Buddhist ideas. Since there wasn’t much material available in Western languages about Buddhism in her day, she got away with it. Her influence was so pervasive that many Western Buddhists — including me apparently — continue to use her ideas without knowing their true source.

I am concerned that this idea of “collective karma” is now being used by some of the more politically motivated Western Buddhists as a way to justify identity politics as compatible with, or even deriving from Buddhism.

I would imagine it’s fairly easy to convince left-leaning types that there is a collective karma associated with being white or being male, and that the sins of white males of the past and present are shared by all who share that skin color and genitalia. I can easily envision many of the folks currently dominating the American Buddhist interwebs applauding that notion and insisting that those born with pale penises ought to repent the crimes of their collective and make amends for them, as well as repent the associated privileges that go with the possession of a pasty colored pee-pee.

But the major problem for me with the notion of “collective karma” isn’t because I think it’s an attack upon what is seen as my own personal collective of white humans with weenies. Rather it’s the extraordinarily obvious ugliness that follows from holding the view that all white men share the collective karma of the bad things white men have done in the past and present.

Because if you think that there’s collective karma for white males, then it follows that every other collective you can name also has its own collective karma. And that’s where things get seriously dicey.

For example, in that blog piece I wrote in 2008 I was reacting to a journalist who asked me what I thought of the way many Buddhists were apparently saying that the cyclone that had hit Burma earlier that year was karmic retribution for the Burmese government’s treatment of Buddhists there. I said that idea was as stupid as when right-wing Christian televangelist Pat Robertson said the September 11, 2001 attacks on New York city were God’s punishment for all the gays and lesbians living in that city.

And if we want to keep going, what about those much talked about privileges enjoyed by white men of today? Wouldn’t that indicate some kind of positive collective karma? If we take the idea of collective racial and gender karma to its logical conclusion then it would seem to be perfectly karmically justified and fair that white men get to be in charge of so many things. Which is a terrible idea!

This is why I reject the idea of collective karma. Not because it points fingers at me as a white man who shares collective blame for the actions of all white men, but because it can be used to justify and perpetuate some really terrible ideas.

The article Collective Karma: Myth or Reality on the website Dhamma Musings is a brief but thorough examination of the implications of the idea of collective karma. I had never heard of its author before I found this article, so I can’t speak to his whole body of work. But I agree with what he says in this article about the dangers and darkness inherent in the notion of collective karma.

My personal take on karma is that I’m a bit of an agnostic. I agree with Dogen, who said we should have a deep belief in cause and effect, and that nothing in this universe occurs without some cause. I tend to assume that I have some level of personal responsibility for everything that happens to me. I assume this even when some of those things appear to be completely outside of what most folks believe anyone can possibly be responsible for, like who my parents are, where I was born, and so on. Yet I do not have a strong conviction about karma. Rather, I’d say that I have a strong inclination toward believing in it.

Still, I feel like it is always best to apply my beliefs about karma only to myself. It never seems to go anywhere good when people try to propose karma as a reason why things happen to other people — individually or collectively. And, in any case, whatever bad a person may have done in the past that might have had led to a difficult situation in the present is irrelevant in terms of how I ought to behave toward that person here and now. If someone is in a bad situation now and needs help, and I can offer help, then I ought to do so regardless of how they got into that situation.

As for collective karma, I don’t think it’s a good theory, plus it is not present in pre-20th century Buddhist sources. From now on I intend to stop using the term, except maybe to make fun of it.

The comments section is closed, but you can write to me directly at bw@hardcorezen.info