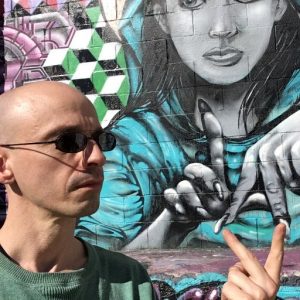 I’m doing an on-stage discussion tonight at 7:30 at Against the Stream Hollywood (4300 Melrose Ave.) with Shozan Jack Haubner, author of the books Single White Monk and Zen Confidential.

I met Shozan at Mount Baldy Zen Center where he was a monk for a very long time. He was one of the people tasked with cooking food and helping out when my Zen group rented Mt. Baldy Zen Center for a retreat a few years ago. At Mt. Baldy, Shozan went by his actual dharma name, Gento. I had no idea he was Shozan Jack Haubner until I brought up the subject of the book Zen Confidential, which I liked a lot, and he admitted to being the author.

He and I became friends after that. We’ve talked a lot about Zen practice. We’ve also talked about his teacher, Joshu Sasaki. My first teacher studied for a short time with Sasaki, and Sasaki’s book Buddha is the Center of Gravity remains one of my favorites. But Sasaki is most famous these days for the high-profile sex scandal he was involved in. Shozan and I have talked about that too.

The two main forms of Zen Buddhism are Soto and Rinzai. I trained in Soto Zen, while Shozan trained in Rinzai Zen. I’ve never practiced Rinzai Zen. What little I know about it comes mostly from Soto Zen teachers denouncing it.

There has always been a rivalry between the two types of Zen in Japan. But it’s a friendly rivalry. There haven’t been any Soto crusades to convert the Rinzais and kill those who refuse to submit. It’s nothing like the animosity between Catholics and Protestants in Northern Ireland.

It’s mostly just one side trash talking the other, while realizing their similarities far outweigh their differences. It reminds me of the fake “wars” that used to erupt between rival radio DJ’s in Ohio. They were always just publicity stunts intended to boost both stations’ ratings.

The major differences between Soto and Rinzai is that Soto practitioners face the wall while sitting, while Rinzai people face away from the wall; Rinzai people typically sit for periods of 20-25 minutes, while in Soto Zen you usually sit for 30-40 minute periods; and they each use the koan stories differently.

Koan means “public case.” Most are stories of encounters between Zen practitioners and the often bizarre conversations they have with each other. Many koans center on a question that seems to be absurd, unanswerable, or both. The most famous of these are, “It is said that everything has Buddha Nature, does even a dog have Buddha Nature?” and “We all know the sound of two hands clapping, what’s the sound of one hand?”

In Soto Zen, the koan stores are often discussed or commented upon. Dogen, the founder of the Japanese branch of Soto, commented on a lot of koans in his masterwork Shobogenzo. You can find some of these commentaries in my new book, It Came from Beyond Zen.

In Rinzai Zen, the question parts of the koans are often assigned to students to meditate upon. They are expected to demonstrate their answers to these questions in a ritual called sanzen, in which they present their responses to their teacher for their teacher’s evaluation.

Shozan’s teacher liked to make up his own questions for students to answer at sanzen. These were called “koans” too. I wonder if that’s the right word, since the word koan usually refers only to the traditional “public cases” of ancient masters. Still, what else can you call them? So, OK, I’ll call those “koans” too.

The other difference is that the Rinzai people tend to place a great deal of value on satori, or “enlightenment experiences,” while in Soto Zen they say that sitting zazen is, itself, enlightenment already — even if you don’t notice it. This is probably the most crucial and important difference, the one with the most far-reaching implications for practice.  It’s also really hard to talk about.

I’d love to talk with Shozan tonight about the differences between Rinzai and Soto practice. I’d like to try to dispel some of the wrong assumptions Rinzai people have about Soto practice, and have my own wrong assumptions about Rinzai practice dispelled. I’d like to talk about the nature and meaning of “enlightenment.” But I doubt that’s what will happen. I don’t know if the audience at Against the Stream will be interested in that stuff. Since ATS is not even in the Zen lineage at all, these things might be totally irrelevant to them.

One thing that I think may be relevant to all of us is Buddhism in America, or Buddhism in the West in general. Is it legitimate? Is it cultural appropriation? Where will it go? What will it be in the future? What is it now?

I’m sure we’ll also have to get into Joshu Sasaki’s sex scandal and sex scandals in Western Buddhism in general. Shozan writes at length about the Sasaki sex scandal in his book. My current book, which I’m also eager to sell tonight, doesn’t have any sex at all in it, sadly. Although my book Zen Wrapped in Karma Dipped in Chocolate does address some of that stuff.

I’m interested in talking about this stuff, but maybe not on stage. Besides which, I would hate to devote the entire 90 minutes we’ve been allotted to discussing it. It’s also nearly impossible to address this subject without getting someone in the audience riled up — especially in light of the current “national conversation” about Harvey Weinstein.

It’s one of those topics that touches on a wide range of issues and shouldn’t be turned into a simple good vs. evil equation. But I fear that even saying that much might get me in trouble. So I won’t be in a great hurry to talk about the scandal tonight.

In any case, I’m looking forward to a lively talk. Details below.

UPCOMING EVENTS (ALL ARE OPEN TO EVERYBODY)

Rinzai Zen sucks, but I still need to make a living after I mope the floor with Shozan. Your donations are my main means of supporting my teaching. If you find a little bit of truth in what I’m saying remember that even a small donation helps. Thank you!