Borders, Microscopes, and Extinguishing the Ego

On April 21-23, 2017 we’re having another Zen retreat at Mount Baldy. Zen retreats are a great way to deepen your practice and get beyond our usual ways of relating to ourselves and others.

I practiced zazen at home by myself for over a decade before I attended my first multi-day retreat with Nishijima Roshi in Shizuoka, Japan in the early 1990’s. In retrospect, I should have sold a guitar or something for the chance to attend one of Katagiri Roshi’s retreats in Minneapolis back when I lived in Ohio. But I was not very smart then.

Now meditation retreats are everywhere. But ours are the best. They’re neither too hard nor too easy, neither too full of ceremony nor too self-consciously devoid of ceremony. We don’t talk your ears off, nor do we leave you to stew in your own juices too much. There’s yoga to help your sore legs and beautiful scenery to remind you what it’s like outside the city.

We’re probably going to cut back on having so many retreats, so get in while you can.

And speaking of ego and the Buddhist idea of no self, here’s a question I got via email:

“Hi Brad. I have a simple question for you that has got me thinking. Through meditation practice, do we ever eventually truly extinguish the ego or do we learn to rise above it by seeing it for what it is (empty) through continuous presence? The Heart Sutra line ‘Form is emptiness. Emptiness is form’ seems applicable if the latter is the case, correct?”

Here’s my answer, embellished for the blog:

I know the traditional metaphor of putting out a fire has been used for thousands of years by Buddhists, but I feel like the phrase “extinguish the ego” is not quite right. 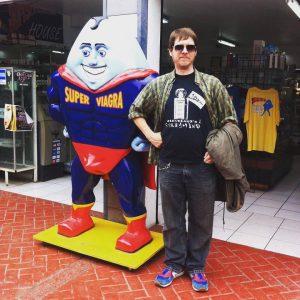 Marijuana is now fully legal in California, but if you try to drive across the border at El Chaparral near Tijuana with your mota, you could get in trouble. Likewise, you can buy Viagra at any drug store in Mexico, but bringing it back up the I-5 freeway into California is a problem. Human beings can’t cross that border without being inspected by other human beings. But if a lizard wants to chase a grasshopper across it, other lizards don’t get too fussed. The border is a concept we humans carry in our collective imagination. Yet you can’t really say the border doesn’t exist.

The fire that those ancient Buddhists talk about is the fire that arises because we make mistakes about the nature of ego/self and then get all hot and bothered about things that aren’t actually real. That fire may get (metaphorically) extinguished, but not the ego. Not exactly anyhow.

Like the imaginary border between the American State of California and the Mexican State of Baja California, the imaginary border we call “self” does have some utilitarian value. I don’t want to get into a big debate about immigration here. But I think people on all sides of the arguments understand the basic value of having national borders. It’s a way to keep conflicts between human cultures from getting out of hand. Even though things still do get crazy sometimes, the concept of a border generally keeps things more peaceful than they’d be if we didn’t have that concept.

Maybe one day human beings won’t need borders. I certainly hope we get to that point. But I know I won’t be alive to see that happen. And I know that if someone tried to force the whole world to open all of its borders before people were ready for it, the results would be catastrophic.

The same may be true with the border called “self.” It’s just as arbitrary and imaginary as any national border. But understanding even that much is difficult. And trying to cross that border before you’re ready can be damaging. That’s why we take this very slowly.

We certainly appear to be eternally separate individuals. I do not have access to anyone else’s memories. I can’t know anything about your internal life unless you tell me. If I smack you on the face, you feel it on your cheek and I feel it on my hand. There seems to be an essential difference between me and the outside world.

It would be idiotic to claim there was no difference at all. There is a difference. And yet, with a bit of meditation practice you begin to see that this difference that seems like such a huge, insurmountable barrier is actually very small.

It’s like you’ve spent your whole life looking through a microscope and then you take your eye away from the eyepiece.

If that actually happened, what you’d see couldn’t fail to be shocking. And yet it’s not as if anything has changed except your perspective. What you saw through the microscope did not become extinguished. It’s still there and you can still see things that way by just putting your eye back on the eyepiece.

All that’s changed is that you’ve seen how small the thing you’d spent your life looking at really was all along.

Led by Brad Warner, this three-day intensive retreat will focus primarily on the practice of zazen. Morning chanting services, work periods, and yoga (led by Nina Snow) will round out the daily activities. The program will also feature lectures by Brad, as well as the opportunity for dokusan (personal meetings).  Participants will be able to take advantage of this beautiful location for hiking during free periods.

Click for the registration form, practice schedules and more!

I make my living mostly from your donations. If you find a little bit of truth in what I’m saying remember that even a small donation helps. Your donations are my major means of paying my rent. Thank you!