Browse: Home / Betrayal of the Spirit

Betrayal of the Spirit 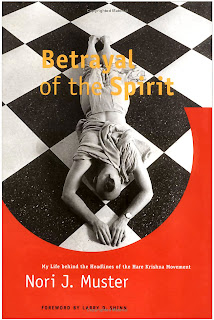 I just finished reading Betrayal of the Spirit: My Life behind the Headlines of the Hare Krishna Movement by Nori J. Muster. This in spite of the fact that I have two Zen related books waiting patiently for me to review them. One’s about Haukuin, the other is about the Heart Sutra. But, frankly, I’m more interested in what happened to the Hare Krishna movement.

In a nutshell, this book is the tale of Nori J. Muster who once went by the name Nandini and served as a key P.R. person for ISKCON (International Society for Krishna Consciousness) during its most turbulent years, the late 70s through the late 80s. This was the time from right after founder A.C Bhaktivedanta Swami Prabhupada’s death through the murders and violence depicted in the book Monkey on a Stick, which covers the debacle of New Vrindaban, the “Hare Krishna Disneyland” (they really called it that) in West Virginia.

The Hare Krishna story in short is that a charismatic, dedicated and sincere monk named A.C. Bhaktivedanta Swami (the Prabhupada part was added later) came to American with something like $2.75 in his pocket and started a worldwide movement based on the ancient teachings he had studied and practiced throughout most of his life. Then he died without clearly naming a successor. The members of his movement have been fighting about this ever since, although things have settled down a lot in the past twenty years.

I can’t find the precise quote because I borrowed the book from the library and didn’t want to mark it up (though I liked it so much I’ll be buying my own copy). But Muster quotes someone who said that Srila Prabhupada had two kinds of authority. There was the institutional authority conferred upon him by his spiritual master. This made him a monk and a teacher. This type of authority could conceivably be conferred upon anyone who went through the necessary steps to receive it.

The other type of authority Srila Prabhupada had was much more nebulous. It was a personal sort of authority that came through his particular personality and the strength of his commitment to his practice combined with all sorts of accidents of fate such as his coming to America in 1965 just when young people there were searching for gurus.

Not long before he died, Prabhupada named eleven men as having the power to initiate new disciples. Each was responsible for a different territory. But he was a bit vague as to whether these men were gurus like him or not. This has been a point of contention ever since. Be that as it may, Prabhupada could only confer institutional authority upon his disciples. He couldn’t give them his charisma or his commitment to practice. And he sure couldn’t pass on to them the accidents of fate that made what he did possible.

A few of the men among that group of eleven were extremely charismatic but insane. A few others lacked such charisma but were very sincere and tried their best to follow what Praphupada had taught. A couple of those failed spectacularly in their efforts, thus sullying the movement even more. Just two of these eleven men remained in positions of authority within ISKCON at the time Muster wrote her book (1997).

This is all fascinating to me because I find myself in much the same position as those eleven guys. There is a lot less at stake in Dogen Sangha International (DSI). We have no monetary assets at all, no “Palace of Gold” in West Virginia, no one selling our literature or our delicious cookies at airports. Dogen Sangha International is not even registered as an entity with any government agency anywhere. Dogen Sangha Los Angeles is. And I believe Dogen Sangha Bristol in England may be. Dogen Sangha (minus the international) in Chiba, Japan may also be. It’s possible others are legally registered in France, Germany and Israel. I’m not sure. But if they are, they are just local entities using that name. DSI has no worldwide meetings to decide policy, no board of governors, no nothing. It’s just a name, really.

Nishijima Roshi conferred a certain degree of what we might call “institutional authority” upon a number of his students, me included. Like Srila Prabhupada, Nishijima could not confer his personal authority upon anyone. The word authority here is problematic. But I’m using it here because I can’t come up with a better term.

Nishijima also named me as president of Dogen Sangha International. But he never spelled out exactly what that meant. It was extremely important to him, though. And because it was so important to him I said “yes” even though I’m no clearer on what it means to be president of something that doesn’t exist than anyone else is. I have resisted any attempts to make Dogen Sangha International anything more definite than it is. (Dogen Sangha Los Angeles, is something entirely different and I’m working toward establishing that as a religious non-profit corporation in the State of California. DSLA will have no authority over any other Dogen Sangha branch.)

In my book Zen Wrapped in Karma Dipped in Chocolate I wrote about what happened when that appointment was made. It was remarkably like what happened to the Hare Krishnas, but without anyone being beheaded by a mad disciple.

I’ve heard from dozens of people since that book came out telling me how things went precisely the same way in their aikido dojo when the master died, or in their church when the pastor passed on and so forth. It’s an incredibly common scenario. It happened at the San Francisco Zen Center when Suzuki Roshi died and, to a lesser extent, at some of the temples Katagiri Roshi established after he died. Paul, Peter and James battled over whose interpretations of Christ’s teachings were correct.

It happened after Buddha died too, according to Stephen Batchelor in his book Confession of a Buddhist Atheist. Batchelor believes that Maha Kashyapa, revered by many Buddhists (and pretty much all Zen Buddhists) as Gautama Buddha’s rightful successor was more of a guy with political savvy who pulled the ranks together than someone who actually understood what Buddha was on about. In fact, Buddha is on record as telling his followers not to appoint a successor.

And this will happen again, many more times.

So why do guys like Gautama Buddha, Srila Prabhupada, Nishijima Roshi and so many others even attempt to set up these institutions? Are they so naive as to think that their institution alone won’t go through what every single other one like it has gone through as far back as the beginnings of recorded human history?

Some of them may be that naive. But my guess is that most are not. Because institutions also manage to preserve these teachings even in spite of the power struggles and suchlike that always take place. We know what Buddha taught (or at least some approximation thereof) because of the institution that wily old politician Maha Kashyapa set up to preserve it. Had Buddha’s followers actually taken his instructions not to appoint a successor to heart, we probably wouldn’t know very much about Buddha today except as a minor philosopher in ancient India.

And there you have my dilemma regarding Dogen Sangha International, and why I am so wishy-washy as to what to do about it.

Answers on a postcard please.

And now yet another commercial for the new audiobook edition of Hardcore Zen!