THE “FRAMPTON COMES ALIVE” EFFECT or CALIFORNIA IS PATHETIC Part 2 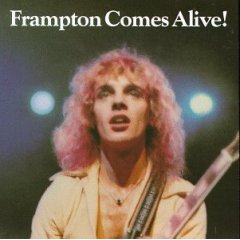 I dunno man… I keep trying to get some butts on cushions at the Hill Street Center. But nothing seems to work. When I try being nice on the blog, hardly anyone shows up. When I insult everyone, hardly anybody shows up.

Anyway, in terms of Zen it doesn’t really matter. In fact, I tend to prefer talking to and sitting with small groups. So when four people who are seriously interested in Zazen practice show up, it’s actually very nice. I’m not in this for the money, or even to make a living at it. I’m not in this to get famous. And I really don’t desire to get the “Frampton Comes Alive” Effect happening.

“The Frampton Comes Alive” Effect comes from an interview I once saw with Chuck Klosterman. He didn’t call it that, by the way. He was talking about the fact that, other than Chrissie Hynde and Devo, none of the Akron new-wave bands that were so hyped as the Next Big Thing in the late 70’s ever really made it. He brought up the success of the album “Frampton Comes Alive” (FCA). For those of you young whippersnappers who don’t remember, FCA was one of the world’s first really, really super mega big selling albums. I’m sure other records and CDs have surpassed it by now. But at the time it came out FCA was so unbelievably huge it seemed like there was nowhere you could get away from it. I sometimes wondered if I was the only one in my high school who didn’t have a copy.

What Klosterman said was that, among all those mega-millions of people who bought FCA, only a small percentage really liked the album that much. But, the record itself became such a huge thing that lots and lots and lots of people bought it just because it was the thing you did that year — you bought a copy of “Frampton Comes Alive.” Klosterman’s opinion was that any piece of art only has a certain number of true fans. Once you’ve passed that number, you’re basically selling it to people who don’t really give a shit about it, at least not as art. They’re buying it for other reasons. Maybe to show everyone they’re hip or whatever, or just because it’s expected of them.

Klosterman’s point was that even though Rachel Sweet, The Rubber City Rebels, The Bizarros, Tin Huey and all of the rest of the so-called Akron Sound artists who got snapped up by major labels in the late 70’s never caught on, that wasn’t such a terrible thing. The true fans of these artists remained loyal to them. The fact that the masses never consumed their product was, artistically speaking if not financially speaking, no great loss. In fact it might have saved some of those people from something that could have been actually worse. Look at what sudden fame did for Kurt Cobain. And his is just one very extreme case. There are endless examples of people who became far more miserable after becoming famous than they were when they were unknown.

How this relates to Zen is that real Buddhist practice may not be for everyone. Well, no. I mean, it definitely IS for everyone. But, in terms of what you can sell as a consumable item or a trend, it definitely isn’t. It’s hard work and most people are, forgive me Jesus, lazy and pathetic. They’re looking for the easy way out and Zen is not it. Nothing truly worthwhile is ever easy. Yet people seem to think that real understanding of yourself and the universe you live in ought to be something you don’t really need to invest any time or effort into. Maybe we’ll spend an afternoon trying to get an “opening experience.” But that’s about all we’re willing to put into it. That’s sad. But that’s the way it goes.

For me as a Zen teacher, I’m happier to have a handful of really honest students than to have the Frampton Comes Alive Effect happen and get a whole bunch of people who are just there because being there is the thing to do. When you come to my classes you’re gonna sit and stare at a wall for an hour with no candy ass “guided meditation” talk to relieve the boredom. I’m sure that cuts down its attraction as a hip place to spend a Saturday morning.

But shit man, you’d think in Southern California, with so many people claiming to be “spritually aware” or into all kinds of Eastern philosophies and religions, there’d be more than four people who were truly interested in real Zazen practice…