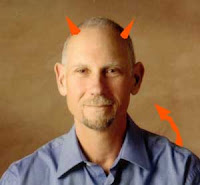 I got an email the other day that I think really shows what is wrong with Genpo Roshi’s Big Mind™ scam. With the writer’s permission I’d like to share it with you:

Just wanted to say its nice to read your stuff and it was nice to read about opposing opinions on the issues of Big Mind™, whether it is right or wrong.

I have experienced Big Mind™ on two occasions, once in a small setting with close friends, and I must admit I enjoyed it and I agree I did have a wow kind of experience, experienced some trippy stuff, you could say experienced oneness of some sort.

My second time was on the island of Ameland and this time with Genpo Roshi on a nine-day retreat. Zen in the morning and Big Mind™ in the afternoon.

Overall I had an unpleasant and at times quite frightening experience and I have been trying to get to grips with it since.

The main issues were what I believed to be repressed sexual abuse, as there is a history of abuse running through our family, and also a running theme of confusion over sexual identity.

When I was unable to deal with what was coming up for me (this included thinking I was the voice of the devil or emptiness unowned) I asked to speak to a zen teacher I know. He suggested I speak to Genpo Roshi about it, not privately but in the group settings with about 250 people plus camera crew. Again I managed to do this after three days and felt it seemed right but I also think after it that I was in a state of shock.

It felt like at times that Genpo Roshi was in my head but maybe this was my delusional paranoia or another voice.

I’m not too sure what I am saying. Only that the retreat left me feeling pretty shocked, like I had taken an acid trip and very fearful of touching it again. My thoughts were wholly suicidal and I was glad to have my girlfriend and someone to talk to when I got back.

I’m left feeling very confused as if I shouldn’t question Genpo, as if he knew better than me, like he said at the end of the last session, “I have you exactly where I want you.” The final voice he requested was that of the voice of Vairocana Buddha. For me this felt like I was having heart palpitations. And then after a friend of mine dropped semi dead on the floor after he asked him to show him ‘mu’ dead. I stood and said, “I am gay.” But I didn’t mean it like that. I thought I was responding to what he wanted.

I’m not sure if you can make sense of this or offer me anything but it would be nice if there was further material on Buddhist practice and sufferers of abuse. Just wanted to know your thoughts were. Part of me thinks I should get a good therapist the other thinks fuck this shit I have had enough.

Thanks for your time

Here is my reply:

Thank you for writing. This is exactly why I think Big Mind™ is such a horrible thing.

One of the things that really bothers me is that Genpo wanted to talk to you not in private, but in front of 250 people and a camera crew. That is just rotten. Really, truly rotten. These things he is running are far too big. A sesshin with 250 people is no longer a sesshin, it’s a circus. And even if all 250 were not at the sesshin proper, allowing that many outsiders to attend even part of it turns it into a circus. The man is after publicity and sees you as a way of fueling his act. It’s utterly sleazy.

Sorry for the rant. As far as the specifics you’re taking about… It’s quite normal during Zen practice for hidden stuff to come up. Much of this can be sexual in nature. I’ve known a lot of people who report memories of childhood abuse or who find themselves questioning their sexual orientation. I’ve never experienced the former personally. But I have had a bit of experience with the latter.

I think the general norm as far as sexual orientation is concerned is to be either mostly heterosexual or mostly homosexual. You can be exclusively one or the other in terms of action. But in terms of thoughts and desires most of us have a bit of the “other team” within us. I certainly do. Since zazen brings up everything, that stuff’s gonna come up as well.

The problem with Big Mind™ is that it’s so focused on those Big Wow® moments that it forces you to go through this kind of stuff much, much too fast. If you go into it slowly the things you uncover have a bit of time to get processed. You’re like a paleontologist gradually brushing away the dirt until after a month or so you reveal the entire tyrannosaurus skull. If you were to just pull it out in one movement, the sight of it (let’s imagine you’re the very first human to see one) would be shocking and horrifying. If you uncover it slowly, you have a chance to get used to it before revealing the whole thing.

I hope you don’t drop your Buddhist practice entirely. But I would very highly recommend staying as far away as possible from Genpo Roshi and anyone associated with him. He knows nothing. He isn’t in your head. He only has you where he wants you in terms of abusing you for his own greedy ends. The man wouldn’t know Buddhism if it sat on his on his face and wiggled.

A friend of mine recently told me that she thought it seemed like I had a vendetta against Big Mind™. I think that’s true. This is serious business. Big Mind™ is irresponsible and dangerous.

But there is a lot of irresponsible and dangerous stuff going on in the world of this type of cheesy vaguely Eastern feel-good-now spirituality. The reason I have focused so much attention on Genpo Roshi’s rotten Big Mind™ scam is because it pretends to be related to Zen. Not only to Zen, but to the Soto tradition of Master Dogen. Genpo has even stolen Suzuki Roshi’s phrase “big mind” — first used in his book Zen Mind, Beginner’s Mind — and trademarked it for himself (SFZC really should make a legal complaint about that, since they own the copyright to Suzuki’s works). But Big Mind™ has nothing whatsoever in common with real Zen practice.

It’s not related to real Zen practice because Big Mind™ is focused on having some kind of special experience, a massive and exciting moment of spiritual orgasm. Zen practice has no relation to these moments. They are not the goal, just a distracting side road.

After that first exchange the guy wrote me another email that said, “I don’t want to appear hateful. My overall concern with these big experience as you say is that they put the experience over and above the welfare of the individual. This seems to show little concern for what happens after. I mean shouldn’t it carry a danger warning, or have therapists on standby or a hotline to call afterwards? You are just stripped clean then sent on your way.”

My sentiments exactly! It’s not nice to mess with people’s heads this way. And Genpo Roshi and his team are not nice people. They’re charging big money for a very dangerous experience without taking even the least degree of responsibility for the damage they do. Even traveling carnivals have more concern over safety.

There is no sense in me trying to convince anyone else to believe what I believe about this Big Mind™ horseshit. Nor can I stop anyone from trying it, no matter how much I wish I could.

I can’t convince you to accept my opinion. But I can make it very clear what my opinion is. And I hope that by doing so I might encourage others, particularly other Zen teachers, to speak out against this abuse of Buddhism.

Some people think it’s a violation of the Buddhist precepts to point out garbage like this for what it is. Genpo and his buddies count on this mistaken interpretation of the precepts to intimidate those who ought to speak out against what so many of us can see clearly is abusive and harmful. I don’t agree with that interpretation. This is some very nasty shit. And all of us who teach Zen are implicated in it by association. Our silence allows it to continue.